I remember reading a book series around 2008 - 2009 — probably as an ebook but maybe a hard copy — which for the life of me I cannot recall. My google-fu skills have failed me too. So here are the details I remember

I also remember not really liking the books then, sort of having too many deus ex machina, but for some reason have them stuck in my mind recently. Any help would be deeply appreciated!

This is David Eddings's The Belgariad series. The young boy was Garion (later Belgarion), visited by Belgarath, a sorcerer and practitioner of The Will and The Word. Garion was indeed working on a farm in Sendar. The various kingdoms band together to battle the Angaraks, a vaguely oriental group of kingdoms which are led by the scarred god, Torak. Polgara was the middle-aged woman that you remember. She is indeed Belgarath's daughter, but Garion is actually the descendent many times removed of her sister, Queen Beldaran. 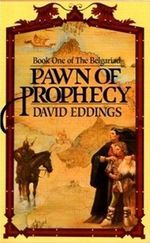 The series continues in The Mallorean, another set of five books, as well as two prologue books, Belgarath the Sorcerer and Polgara the Sorceress.

The question has been answered already, but I'm filling in more details about the particular bullet points mentioned.

•The name of series started with B... something like Bar@@@@

Sounds like the Belgariad, which previous answers has pointed out. It was written by David Eddings. There is also a second series that takes place in the universe called the Mallorean which follows after the events in the Belgariad. There's also a novel dedicated to Belgarath's exploits and another dedicated to Polgara's adventures as well as a book called 'The Riven Codex' that is a compilation of all of the holy books, details about each of the kingdoms and author notes.

•There was a ancient wizard, who was sort of immortal, or maybe just very very old, disguised as a common man at the start

That would be Belgarath, who isn't quite immortal but very old. He's a disciple of the god Aldur, and is a sorcerer. Wizard is an insult to his kind.

•Hero was a young boy, introduced as an orphan, working in some rich noble's kitchen or kitchen farm

The boy's name is Garion, and he was a scullery boy. The farm he grew up in was in the kingdom of Sendaria, a nice kingdom of farmers. The farm was owned by a man named Faldor, and I wouldn't necessarily call him a noble.

•Magic was used ages ago, but common folk have mostly forgotten about it

In the kingdom the novels start off in, this is true. Those don't believe in that sort of nonsense. However, Magic is still used (in this universe magic summons demons, and there's different types like sorcery and witchcraft). Belgarath, Polgara, and several others use Sorcery, which involves the concept of "The Will and The Word" where they focus their energy and think of something and it happens (kind of like a Lantern Ring, but it isn't a construct it really exists and is permanent).

•There are several kingdoms, one in snow, one is an island, one is open grassland, and then there is a huge, big bad evil kingdom in north

In this world, there are several kingdoms. There are at least two in snow, but the main one is Cherek, which is a mirror to Viking culture. The one that is an Island is Riva. Plains kingdom is Algaria. There is also Drasnia, a swamp in the western portion, plains in the east, and snow in the north. Sendaria which is farmland. Other kingdoms include Tolnedra, an empire with roman like qualities, Nyissa, a jungle kingdom with an affinity for herbal suppliments, Arendia which is the most medieval like with knights and robin-hood like characters.

As for the 'bad kingdoms' there are three on the main continent, and one on the other side of the world (which that empire is the focus of the series of books after the belgariad), who are all of a group of races called the 'Angaraks'. Those kingdoms are Cthol Murgos, Mishrak ac Thull, and Gar og Nadrak. Cthol Murgos is definitely a kingdom of bad guys, the other two are forced to be bad by a caste of priests called the Grolims. The Nadraks are in the northeast corner, Murgos to the southeast, and Thulls are in the east.

•Wizard helps forge / renew alliance between all kingdoms slowly, having to work through some politics

Most of the books follow a plot where agents of the sleeping/evil god are sowing discord among the good kingdoms and Belgarath and co. have to sort it out. Politically, there's the beginnings of a succession conflict in Tolnedra which is cause for trouble, but that's sorted out in a surprising way.

Garion was taught several things by his traveling companions, such as sword work, horse riding, and even the secret spy language of the Drasnians. However, Belgarath was the one to introduce him and teach him sorcery, since he's one of the few with the ability to use it.

•There is eventually a war, but the good kingdoms sort of manage to defeat the evil king (he may have been crazy / megalomaniac)

Evil king: Taur Urgas, who is insane, he runs the 'evil' on the southeastern portion of the continent (and in a later series, it's revealed there's a large southern portion too). There's also Zakath, who is emperor of the 'evil' kingdom across the ocean.

•After war, wizard and boy go to the location where evil god (something with T... Tarturs or something) is sleeping, but whose evil keeps seeping into the world

You said the 'w' word again! Yikes! Belgarath(the old guy), Garion (the hero), and Silk (a guide and travelling companion) go to Cthol Mishrak where Torak sleeps, and there's this fight of epic proportions.

•There may have been a middle aged woman, fiery in temper, also a witch, probably daughter of ancient wizard, and mother of hero

While there were a few moments in the Belgariad where you see Polgara throw a fit, the character who had the fiery temper was Ce'Nedra, a half dryad Tolnedran princess. She would often argue with Garion and would raise her voice several octaves as the argument progressed.

This sounds exactly like The Belgariad series by David Eddings. The first book was Pawn of Prophecy, and the hero Garion, had just these sorts of adventures over the five books with his immortal wizard forbear Belgarath and aunt Polgara. there's also a five volume sequel series.

13
Multi-volume fantasy series with forbidden spell of undoing
11
Book about teaching magic and an old stone
10
Book about very long lived wizards who live in a secret grove and watch society evolve
10
Novel: Wizard's memoirs, servant to a god, long timespan
6
Fantasy book where magic can pull objects from other dimensions
33
Fantasy series where magic was done by saying what you wanted

19
Young adult Christian fantasy series about 2-5 kids who traveled to an alternate world and met strange sentient creatures
6
Identify fantasy story with magical boy, girl who marries a prince who is assassinated
8
80s-90s Book (part of a series?) About Teenager Who Fights Greek Monsters
10
60's/70's Trio of books about being attacked by giant bats that take away your ability to think
7
Book series: last dragon, transformed to a human by a wizard, falls in love with an elf
9
What was the fantasy novel with a fire/fertility goddess named Fala and a sea god named Sur?
6
Fantasy book series about a boy who is unaware of a different realm he travels to; a grand wizard there asks him to join a quest to slay a dragon
16
'90s fantasy series about boy training to become a wizard