Who is the hobo in “The Polar Express”? 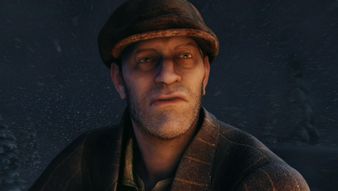 He claims to be the 'King of the North Pole', but I'm not entirely sure.

Who or what is he? I'm looking for an out-of-universe explanation regarding who or what this character is.

There are a few theories, probably all of them true.

The Hobo is a literal ghost

In the DVD extras, there's an additional song which features a backstory about the "king of the train" being killed in a tunnel and haunting the train

The Hobo is the "Ghost of Xmas Past"

There are more Dickens references in this film than you can shake a stick at. With the young boy representing the disbelieving Scrooge, the 'Three Ghosts' become the Hobo (Past) the Conductor (Present) and Santa (Future). Note the Ebeneezer Scrooge cameo about halfway through the film.

There's a fair argument to be made that the Hobo represents the 'Holy Ghost' of the classic Christian trinity with Santa as 'the Father" and the Conductor as the 'the Son'.

Not the answer you're looking for? Browse other questions tagged character-identification polar-express or ask your own question.

19
Who was “John” in the 2004 film Immortal?
22
Who is this character, wearing a space suit with a big hole in the upper torso?
9
Character in Buffy (possibly Angel) who could not lie
2
Who is Ben in the John Carter universe?
6
Who were these recent Wolverine bad guys who mimicked his healing factor/claws with tech?
12
Who is the titular “Heir to the Empire”?
3
Who is this bounty hunter?
2
Who is the shirtless man getting thrown out of a female officer's quarters in Star Trek Beyond (2016) and is it Kirk?