During the trial scene at the end of Star Trek IV: The Voyage Home, there are three women seated on the front row in the background who appear to be existing characters, but since we never see them up close I can't really tell. Here's an enlarged screenshot of the scene in question:

I've circled the two I THINK I know - Grace Lee Whitney as Janice Rand, and then next to her is Majel Barrett as Christine Chapel. I've also confirmed that both actresses have a credit on the film as their existing characters, but could find no other place in the film where those characters appeared.

Can someone confirm this for me, as well as identify the third woman?

UPDATE: Starlog #116 confirms that the middle woman in question is indeed Majel Barrett as Dr. Christine Chapel. She originally had a scene speaking with Sarek but it was cut from the final film.

Yes: they are Rand and Chapel

In the update to your question, you have already found confirmation that the woman who is second from the right (with the full Starfleet uniform with green medical tunic) is Majel Barrett as Dr. Christine Chapel. So I'll focus on the woman to the left her.

This is indeed Grace Lee Whitney as Janice Rand. Here is a promotional print of Whitney in character for Star Trek IV: The Voyage Home, with identical hair and uniform: 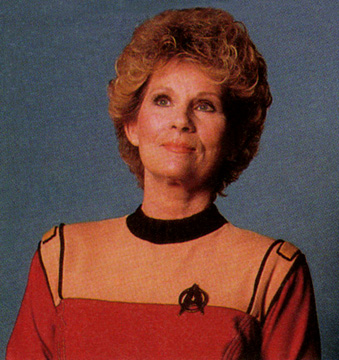 As well, here's an image from the scene in question where you can see both characters' faces much more clearly:

I should also point out that Rand does appear elsewhere in the film. She can be seen inside Starfleet Command in the first half hour of the film, assisting with the coordination of emergency operations as the extreme weather pummels the installation:

Not the answer you're looking for? Browse other questions tagged star-trek character-identification or ask your own question.