Had the second Death Star fired its weapon prior to the Battle of Endor? 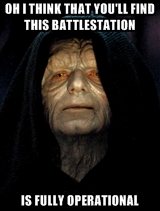 is what the Rebels discover in Return of the Jedi when they launch their assault on the second Death Star.

Had the Empire tested the second Death Star before the Rebel fleet's arrival? If so, on what? Or did it work without a hitch on the first try during the battle (presumably because of good craftsmanship, careful attention to design details, and an intense fear of the Emperor)?

I'm going to say "Yes", not based on what we see in the film's official novelisation, but what we don't see.

Firstly, I want to get across quite how pants-wettingly scary Vader is. He is quite literally the most terrifying thing you can imagine. Waves of "Dark Force" wash off this guy and he can make even hardened rebels run and flee by his mere presence. And he's got a boss. And that boss is somehow even more intimidating.

The guy who's in charge of making sure the station's working properly, Commander Jerjerrod practically soils himself when he learns that the Emperor is coming and that he might need to explain to him that the Death Star might not be operational on time.

Spin forwards and we see them preparing to fire the main cannon on the Emperor's orders...

“Witness the power of this fully armed and operational battle station.” He walked over to the comlink and spoke in a gravelly whisper, as if to a lover. “Fire at will, Commander.”

Down in the bowels of the Death Star, Commander Jerjerrod gave an order. It was with mixed feelings that he issued the command, because it meant the final destruction of the Rebel insurrectionists—which meant an end to the state of war, which Jerjerrod cherished above all things. But second to ongoing war itself, Jerjerrod loved total annihilation; so while tempered with regret, this order was not entirely without thrill.

Did you see it? Did you see his abject terror that the gun might not fire? No?? That tells me that it's been test-fired it before. He knows that it's working before he presses the button. There's no trepidation, no fear that he might have to go up the elevator to speak to the Emperor about why he just made him look foolish in front of his guest.

Sometimes the absence of a thing is as telling as its presence.

Not the answer you're looking for? Browse other questions tagged star-wars death-star return-of-the-jedi or ask your own question.