Animated show: Mechs in space and an annihilating super weapon

I watched it in the 90's on Cartoon Network or Fox Kids or something like that. There was a space fleet (with a mothership of course), and there was a team of people, each of whom piloted one "mech" (big, anthropoid robot) while exploring and fighting on various planets. I have a vague memory of one mech being piloted by someone like Jubilee from the X-Men cartoon, and another by someone like Captain Nick Fury (the white one) from the animated Spider-Man - but that is probably my faulty memory.

In one episode a kind of super weapon was activated. It was an orange field that grew from the generator ship and annihilated (or maybe just stopped) every ship in sight.

That is all I can remember. (I don't think it was Japanese - but that is only a hunch)

I think you may be describing Exo Squad: https://en.wikipedia.org/wiki/Exosquad

Exosquad is an American animated television series created by Universal Cartoon Studios as a response to Japanese anime. The show is set in the beginning of the 22nd century and covers the interplanetary war between humanity and Neosapiens, a fictional race artificially created as workers/slaves for the Terrans. The narrative generally follows Able Squad, an elite Terran unit of mecha pilots, on their missions all over the Solar System, although other storylines are also abundant. The series ran for two complete seasons in syndication from 1993 to 1994, and was cancelled after one third-season episode had been produced. 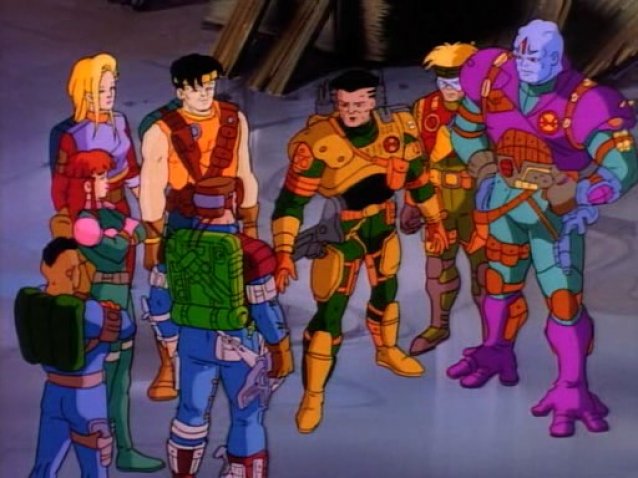 Not the answer you're looking for? Browse other questions tagged story-identification tv space or ask your own question.

13
Cartoon movie where the main character had a robotic arm
8
Old cartoon / anime about a spaceship that transforms in to a robot
5
80s/90's Robot cartoon, one like a Transformer
5
Discovery Channel movie about a rover entering an organic spaceship, activating a green light that causes black spheres to appear on Earth
4
Old anime TV series with flying mechanical ships and dragons