Looking for a space epic where the main characters are an A.I. and a woman

Years ago I bought a new Sci-Fi book. Likely published between 1998-2006. It stood out to me because I think it had won some sort of award and it was featured in a bookstore that did not predominatantly sell Sci-Fi.

The size of the book was larger than the typical soft cover printing and there was a design some of some darkened space scene on the front (I know, I know, not helpful)

The Plot: I have forgotten the main part of the action/adventure. But what struck me was the fact that the main character (female) was trying to figure out who her true enemies were throughout most of the book. At times this included her non-corporeal A.I. (her spaceship?) that had been with her most of her life.

The enemies are vanquished in the end. And as all things are revealed, it turns out to be a beautiful love story between the woman and the A.I. One that is not bound by conventions of gender or form. I believe that they are able to share their consciousness directly with each other somehow.

The description of this melding of souls was something that haunted me over the years and regret immediately giving the book away to a friend. I have even had a few dreams about it... which I hope has not further muddled my memory of the story.

It was suggested to me that it might be Ancillary Justice, but the plot and the publishing date aren't quite right. Still, it is next on my list to read, I hear it is good.

It is very good I highly recommend it: 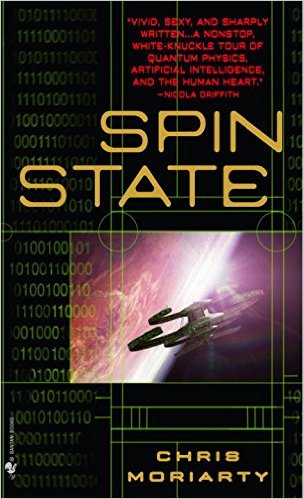 UN Peacekeeper Major Catherine Li has made thirty-seven faster-than-light jumps in her lifetime—and has probably forgotten more than most people remember. But that’s what backup hard drives are for. And Li should know; she’s been hacking her memory for fifteen years in order to pass as human. But no memory upgrade can prepare Li for what she finds on Compson’s World: a mining colony she once called home and to which she is sent after a botched raid puts her on the bad side of the powers that be. A dead physicist who just happens to be her cloned twin. A missing dataset that could change the interstellar balance of power and turn a cold war hot. And a mining “accident” that is starting to look more and more like murder...

Suddenly Li is chasing a killer in an alien world miles underground where everyone has a secret. And one wrong turn in streamspace, one misstep in the dark alleys of blackmarket tech and interstellar espionage, one risky hookup with an AI could literally blow her mind.

From the Amazon link:

Does a clone have a soul? Darling, an astronavigational control unit and personal companion, achieves sentience and wants to know. Now, 200 years and an artificial body later, he is off in search of a dead artist, a living artwork, and the forces behind a mystery that spans the universe. Accompanied by a female assassin, he'll confront the Maker and get the answer.

It doesn't quite match up with what you're saying, but since you seem pretty fuzzy on a lot of things, could it be Old Soldiers? It involves a woman commanding a sentient Bolo tank, defending against alien invasion. During the course of the story they communicate by a neural interface, in the end she's fatally wounded and her consciousness is 'uploaded' to fuse with the tank's consciousness. I wouldn't really call it a love story.

15
I'm looking for a sci fi book with a tribal woman, hermaphrodites, and implanting minds into new bodies
12
Looking for a book with two main characters and dragons in the plot
7
Story with female lead and characters named Epsilon and the Lemon Squire
6
Looking for Sci-Fi trilogy, where main character is born a woman but spends the majority of the series as a man
7
Space sci-fi movie where a woman goes to space and loses her memory
10
Sci-fi novel or novella where "Eliza Tertia" was one of the main characters
7
Looking for name of old sci-fi book from the '70s or '80s that had a main character with an aiming chip in his hand