Girl with magic confronts a demon and heals tree

This was a short novel that was probably written in the 80s or 90s.

A young girl, maybe teen, lives in a small village area, and has magic powers. She can see some magical creatures that most people can't, such as some sprite or dryad being.

There's a man that's actually a demon, and I think he tries to get close to the girl by ingratiating himself with her caretaker or others in the village.

In the forest, there's this big tree, and something is wrong with it. I think there may have been demonic runes making the tree sick. If the tree died, then it meant something worse would happen. I think it meant the demon, the main antagonist of the novel, would overtake her, or the forest would die, or some demonic agenda would be set in motion. I can't remember which, or if I'm mixing up aspects of the book.

The demon knew about the girl and her magic, which was apparently a rare attribute. He was trying to gain control of her. His plans were thwarted when she healed the sick tree in the forest, but I don't think he was actually defeated/vanquished.

The end of the novel left it open for a sequel, but I don't know if one was every written.

I used to own the book, but can't find it, so it was probably lost in a move. I think it may have had a reddish cover, and it was possible written by a female author.

I believe this is Running with the Demon (1997) by Terry Brooks. 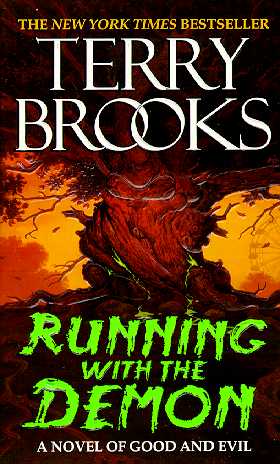 From the Wikipedia description (linked above):

It concerns two magic-users, Nest Freemark and John Ross as they try to stop a demon that has come to town...

Later that day, an alarmed Pick leads Nest deep into the park forest and shows her a great oak tree with crevasses in its trunk. The tree is actually a prison for a maentwrog — a powerful magic beast known for devouring multitudes of people. The demon has weakened the tree and the maentwrog is threatening to break free, but Nest and Pick do a patch job to strengthen the tree's integrity.

I believe Nest is the girl you are remembering and Pick is the sprite that she sees.

The novel had a sequel, A Knight of the Word.

6
Book about a crippled man fighting the devil

7
Movie with an Indian girl helping a willow tree and a horse after playing with the personified wind; other girl is punished for doing the opposite
8
Fantasy quest novel where the music magic hero doesn't get the girl
5
Manga where the main character sees the group of heroes defeating the demon king, gets stabbed in the back and reborn into his younger self
5
A manga with A weak guy that meets his future strong self and he uses his future self's memory and power to kill the demon kings