Did the Winter Soldier and Black Widow programs ever interact?

The Winter Soldier and Black Widow programs were both Soviet operations where citizens were modified and brainwashed into near-superhuman assassins and used for espionage and enemy elimination. Both were in use from soon after World War II right up to the fall of the U.S.S.R.

In either the Marvel 616 universe or the Marvel Cinematic universe, were these projects ever shown to interact? 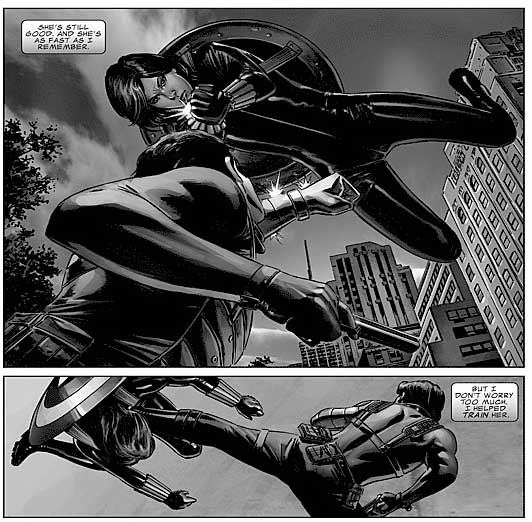 The Black Widow recognizes the Winter Soldier and is shocked to see that he is still active. The Widow and the Soldier once shared a romance with each other back in the days when they were both tools of the Soviet Union under Colonel Karpov. Now, the two are forced to fight one another. The Winter Soldier gets the upper hand, and knocks Natasha out. He grabs the shield and disappears.

A revised, retconned origin establishes her [Black Widow] as being raised from very early childhood by the U.S.S.R.'s "Black Widow Ops" program, rather than solely by Ivan Petrovitch. Petrovitch had taken her to Department X, with other young female orphans, where she was brainwashed, and trained in combat and espionage at the covert "Red Room" facility. There, she is biotechnologically and psycho-technologically enhanced—an accounting that provides a rationale for her unusually long and youthful lifespan. During that time she had some training under Winter Soldier, and the pair even had a short romance(as above)

The MCU hints at a past but doesn't confirm any interaction as the comics do.

BLACK WIDOW: I know how much Barnes means to you...I really do...

BLACK WIDOW [to Bucky Barnes]: You could at least recognize me

In the film, The Winter Soldier, Natasha Romanoff (aka Black Widow) tells Captain America that the Winter Soldier (aka Bucky Barnes) shot her five years prior to the film:

BLACK WIDOW: I know who killed Fury. Most of the intelligence community doesn't believe he exists. The ones that do call him the Winter Soldier. He's credited with over two dozen assassinations in the last 50 years...Five years ago, I was escorting a nuclear engineer out of Iran. Somebody shot out my tires near Odessa. We lost control, went straight over a cliff. I pulled us out. But the Winter Soldier was there. I was covering my engineer so he shot him straight through me..Going after him is dead end, I know, I've tried.."

One of the Russo brothers (who directed both The Winter Soldier and Civil War) stated the following:

"...Well, I mean, look, there's a reference obviously in The Winter Soldier that he shot her. So, uh, there is a history there. As to whether that is their only history...I don't know...We'll have to find out..."

As to whether the programs interacted, it is a possibility that they may explore this. They have hinted at a history between the two, but as of yet there is no full confirmation in the Marvel Cinematic Universe (the films, that is. Not the comics); it is up for interpretation at this point.

Not the answer you're looking for? Browse other questions tagged marvel marvel-cinematic-universe captain-america captain-america-the-winter-soldier black-widow or ask your own question.