Did Palpatine ever return to Naboo as the Emperor?

In the waning days of the Galactic Republic, Palpatine was a Nabooan public figure, nobleman, Senator and, foremost, the Supreme Chancellor. At the latest, as he declared himself the Emperor, he must have become the "golden boy" of Naboo. But did he ever go back to his home planet and enjoy the popularity?

I can't find any canon reference to Palpatine returning to Naboo while he was the Emperor.

However, Wookieepedia mentions that there was an Emperor's Retreat on Naboo in Legends (originally from the MMORPG Star Wars Galaxies): 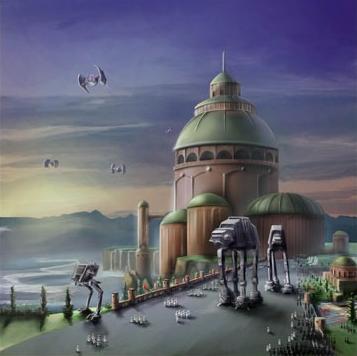 Wookieepedia also notes that the Emperor's Retreat was mentioned in The Complete Star Wars Encyclopedia.

The Retreat seems to have been mostly used for holding court and planning missions rather than visiting the natives, though. An archived page from the Star Wars Galaxies game website indicates that players could meet the Emperor himself at the Retreat after completing several tasks in the service of the Empire, and that the Emperor would give the player further tasks to complete on Naboo:

Once you have completed many tasks for the Empire, you will be rewarded for your efforts with one of the greatest honors any Imperial officer can receive: the opportunity to speak with the formidable Emperor himself.

One of the most cunning and brilliant minds in the galaxy, Emperor Palpatine is a powerful Dark Lord of the Sith and the dictator of the Galactic Empire. Palpatine is the head of the New Order, dedicated to restoring stability to the chaotic galaxy by ruling with an iron fist. The Emperor uses the Force to see his enemies' movements in advance and plans accordingly.

The Emperor asks you to play a part in one such plan involving the Queen of Naboo and the Naboo High Council. The Emperor suspects that the Queen's sympathies lie with the Rebel Alliance. He commands you to use all the skills at your disposal to put the unsuspecting Queen to the test without any blame falling on the Empire.

As Valorum said in a comment - it does not appear to have positive canon support.

However, there may be a hint that he possibly may have visited:

Captain Phasma's armor is "polished in chromium, which had been salvaged from a Naboo yacht that had once belonged to Emperor Palpatine" - Star Wars: The Force Awakens: The Visual Dictionary

Notice it doesn't say that it belonged to Senator Palpatine - so, with a reach of head-canon, we may consider that the Emperor might have returned to Naboo himself to obtain a personal yacht.

48
Why didn't the Jedi use Order 65?
11
What powers did the Imperial Senate have?
37
How was Palpatine able to rise through the Senate so quickly to become chancellor?
31
How much did the Trade Federation know about their 'lord' at time of blockade?
22
How did Palpatine's Chancellorship survive the Zillo Beast attack?
54
Is Palpatine's execution of Order 66 legally justified?
8
Why did Darth Sidious wear a cloak?
24
Why does Darth Sidious fear Luke Skywalker?
11
Is there a difference between the congress and senate?