What does Oliver Queen mean when says he wants "a piece of him" in the Dark Knight Returns?

-You draw too much attention to yourself. Always have. I mean, sure, you play it mysterious... but it's a noisy kind of mysterious. You, they have to kill.

-What is it you want, Oliver?

-A piece of him. The schoolboy.

The schoolboy is something of an affectionate (or not-so-affectionate, in this case) term for Superman. More fully called "The big blue schoolboy" elsewhere in the series. Superman's also often called variations on "Boy Scout," and other similar terms, for his tendency to always follow the rules (in the case of the Dark Knight Returns, even where the rules are clearly immoral).

"A piece of" is slang for wanting to take someone on a fight, or at least get a good hit in. (Often heard in contexts like "You want a piece of me?" when provoking someone into a fight)

So Green Arrow saying that he wants "A piece of (the schoolboy)" it means he wants to be part of the fight if Bruce fights Superman. Other scenes suggest that Superman was responsible for Oliver's arm loss, so it's natural that Oliver wants some amount of payback, even if he knows he can't win taking him one-on-one like Bruce might.

It's hard for a one-armed archer to defeat Superman single-handedly.

Superman apparently tore off Oliver's arm, and Oliver wants to help Batman take him down. 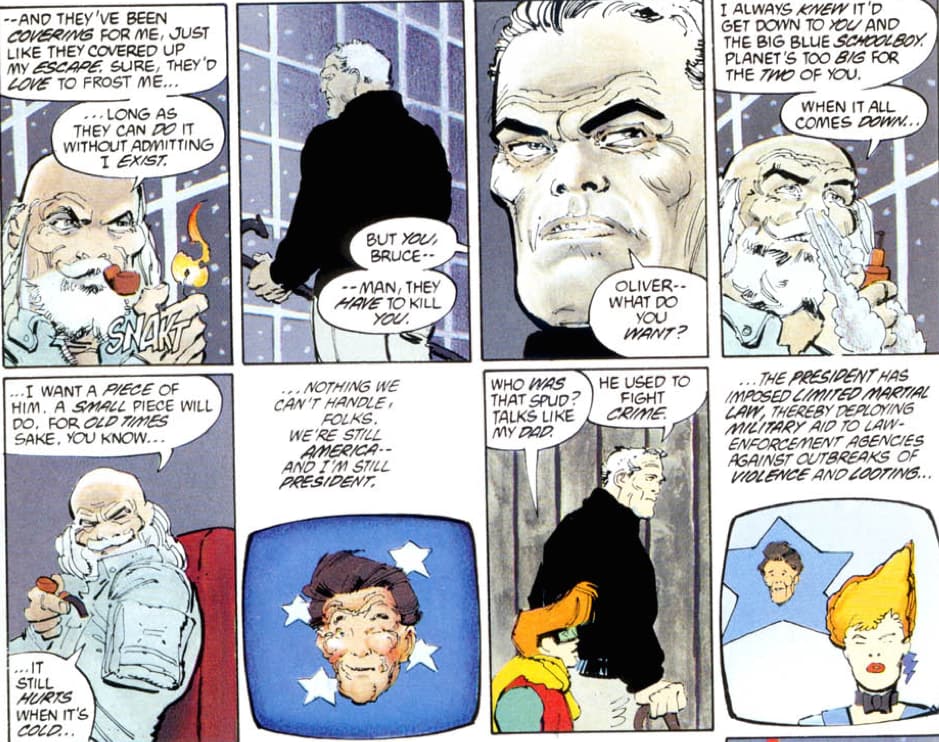 When he says 'a small piece' he gestures towards his missing arm. Implying, Superman took a piece of him, and he wants a piece back.

So, you should check out the scans on this page:

In the next panel, Oliver pulls his arm out of the deadman switch, killing himself. I think that, in writing The Dark Knight Returns, Miller chose to set his alternate future in a timeline that follows a past where Superman interceded, and saved Oliver Queen's life by ripping his arm off.

Not the answer you're looking for? Browse other questions tagged dc batman dark-knight-returns or ask your own question.