Why is superman still bruised at the end of the dark knight returns?

After the battle between Superman and Batman in The Dark Knight Returns, Superman goes to Batman's funeral. However, Superman still has his face all bruised.

We have seen that Superman regenerates super fast, even in the same story (after the nuclear blast) so why is he still bruised? Is it because the kryptonite is still affecting him, or another reason? Is he losing his powers? Or becoming human? 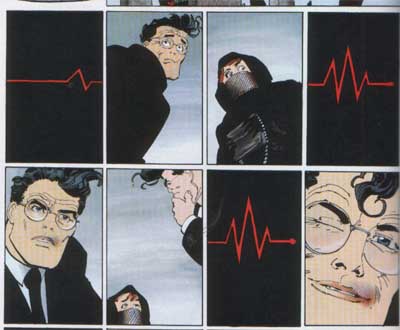 Superman was noted to have been considerably weakened by the nuclear explosion earlier in the issue, one of the reasons Batman was able to go toe-to-toe with him, even with the exoskeleton and kryptonite. Presumably, it's affecting his healing.

More than anything, this was a bit of a story conceit on Miller's part; he was a very strong Batman fan, and took some personal issue with Superman's near indestructibility. This was one reason why he allowed the fight between the two friends to take on such a brutal tone in his graphic novel. Visually, it offered a lot of pathos, as well; a still-healing Clark coming to pay his respects to "the only man that ever truly beat you" [Bruce's words to him in the comic] was both beautiful, and evocative.

In story, however, the answer provided by Fuzzyboots was correct; between the dirty missile blast, the lack of solar radiation and the powdered kryptonite traces still in his body, his healing may not be functioning at optimum. Keep in mind, this would like be the early version of Jon Byrne's Post-Crisis Superman, who was totally solar powered, and shown to be markedly less powerful------ and consequently, more vulnerable---- than previous versions. Though to be fair, up to that point [1987] we'd never seen even that Superman have a bruise for more than a few hours.

A better question would be why, after being affected by the nuke, didn't Superman just fly out into space and directly absorb some sunlight and come back fully healed and recharged, or at least go under some special solar lamps for the boost, especially before he had to face Batman in that no holds barred fight?

Not the answer you're looking for? Browse other questions tagged dc batman superman dark-knight-returns or ask your own question.