I have been looking for this movie for a while now (it is an old movie). The movie is either Chinese or Japanese, set in a modern society, and deals with three superhero women; I think they are sisters.

One sister has recently married and had a baby; her husband is in a position of power, either a police officer or in the government. The women can fly, use weapons well, and have super-strength.

The corrupt government is trying to control the people by limiting water to only a select few to make slaves of the people; they have hidden the reservoirs and the sisters go looking for the water.

I'm pretty sure you are remembering Executioners, a Hong Kong film from the 1990s, directed by Johnny To and Ching Siu-tung. The three heroines are played by Michelle Yeoh, Anita Mui and Maggie Cheung, in a sequel to a film in which they were also co-stars: The Heroic Trio. 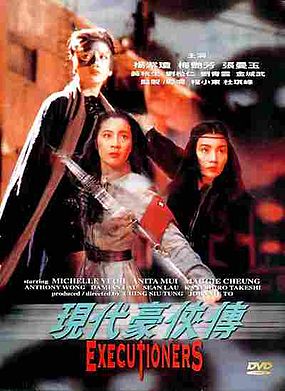 Here's a quote from a bare-bones plot summary that's attached to the IMDb listing for the film. It's close enough to your summary-from-memory to strongly suggest that this is the same film you were recalling.

Set some time after the original 'Heroic Trio,' the city has been devastated by nuclear attack. An evil deformed villain controls the city's scarce water supply, exerting influence over both a popular leader and a militarist colonel. The trio of Chat the Thief Catcher, Ching, and Wonder Woman (along with her young daughter) have to avert a military takeover and find clean headwaters to save the city.

(Note: The reference to "Wonder Woman" does not mean that the producers had permission to use the DC Comics superhero character known as "Wonder Woman." I'm guessing that this is just a close translation of whatever the original Chinese phrase was that was used for Anita Mui's character, who did not come across as being a princess from a secret island inhabited by the Amazon women-warriors of Greek Myth.)

Not the answer you're looking for? Browse other questions tagged story-identification movie supernatural-abilities or ask your own question.