What was that movie with the man with the robot arm?

This was a while ago, I was probably around the age of 7-9. Around those times I used to love watching movies with my stepdad. I remember this one movie, I totally forgot the name which was about:

Anyways, anyone know what movie I'm talking about?

Could it be the movie Elysium? Dystopian Los Angeles factory worker Max is exposed to a lethal radiation dose during an industrial accident. He has a broken wrist from a previous encounter. His only hope for a cure is to sneak onto the space station Elysium and get to a med bay. To get there he has to work with an underground organization that grafts an exoskeleton to him and sends him to invade the space station. Movie came out in 2013 so it might be too recent. 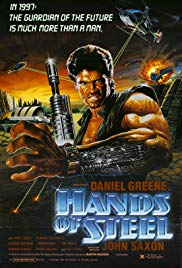 A cyborg is programmed to kill a scientist who holds the fate of mankind in his hands. He fails and hides in a diner in a desert run by a woman who likes him. The people who sent him are after him and so is the local arm wrestling champ.

I don't remember the whole movie. Just some vague memory about a guy with a robot arm and some arm wrestling scenes.

This sounds like The Long arm of Gil Hamilton by Larry Niven. I read this over 40 years ago I don't remember how he lost his arm. He was a detective in Niven's known space.

12
Cartoon movie where the main character had a robotic arm

7
Forgot the title of the movie with a bad killer robot in a spaceship
4
Movie on daytime TV in the mid-80's ... Children enter pink cave, each of them gets a visible "neck drill" making them part of the evil/alien/robot/
4
Movie with a killer robot/android in a spaceship
59
Movie about a boy, two men, a robot and a war
14
What is the name of this scifi movie with an AI robot on another planet gone rogue
9
Dystopian Arthouse film about a man making a robot in a dystopian destroyed city
7
80's-ish sci-fi movie with guy/car saving a girl (cyborg?) and car chase at the end of the movie