Why is Xenon always trying to kill Supergirl?

Why is Xenon always trying to kill Supergirl in the comics ?

I mean, I know he's a villain, that's what he's supposed to do, but why does he hate Supergirl specifically ?

We learn in Supergirl Vol 4. #78 that at some point in the past, while engaged in general villianry Xenon was confronted by Supergirl. At the end of this encounter, she shoved him into the void between universes where he was stuck for uncounted eons. He took that quite personally and, on securing his release, has made it his personal business to travel through time and space throughout the multiverse killing all Supergirls everywhere.

In addition to fulfilling his personal vendetta, his long-term goal (given that he doesn't know which of the countless Supergirls were responsible) is to murder them all, thus preventing his imprisonment from ever having taken place in the first place. 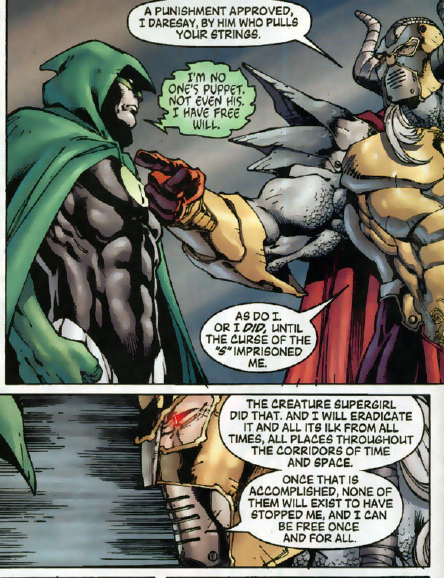 Not the answer you're looking for? Browse other questions tagged dc comics supergirl or ask your own question.

5
Why did Superman & Supergirl start to suffocate instantly when Luthor made our yellow Sun red?
6
Super villain with handlebar moustache and super strength
41
How does Supergirl get her ears pierced?
5
Are there conditions to Superman's appearances in Supergirl?
5
Why is Supergirl vulnerable to Bizarro's powers?
11
Any comics or other media where Kara got to raise Kal-El as she was supposed to do?
4
Did Superman ever regain his memories of his Legion adventures with Supergirl?
3
What were Felicity and Ray saying about Supergirl?