How do the Ninja Turtles get the money to pay for their pizza?

We know that the Ninja Turtles (TMNT) love pizza. We often see them pay for the pizza.

How do they get the money to pay for the pizza? Is there a canon explanation for this?

But I want answers about the TMNT world, in general. Not only about this film.

It would appear that the Turtles do odd-jobs to earn money, especially those that allow them to move around without attracting (unwanted) attention. 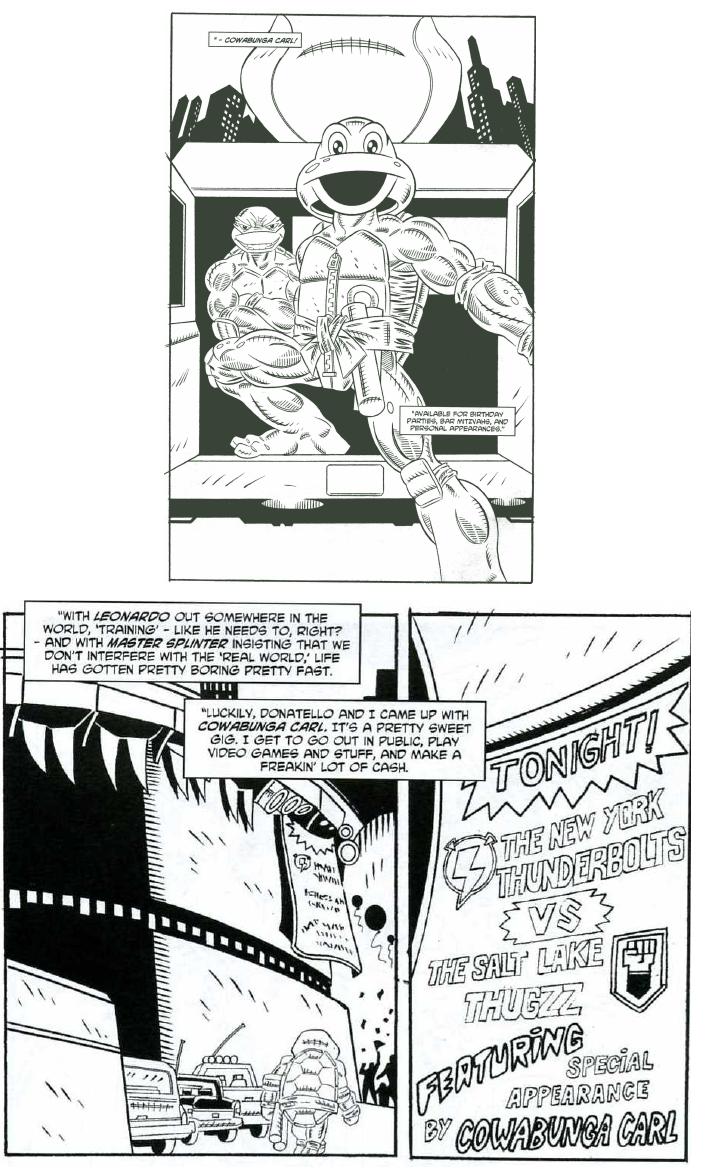 Donatello shares those earning by working as his driver 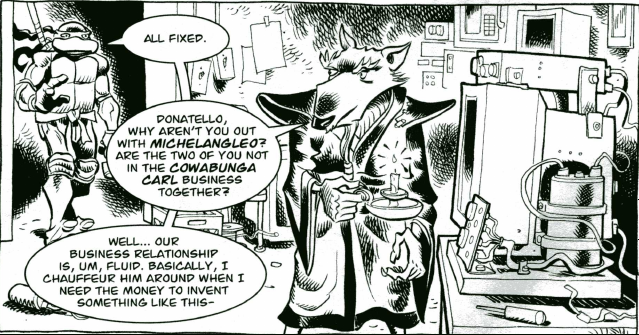 And Raphael uses his knowledge of comic-books to find bargains at his local thrift stores (which he then sells on, after having read)

The answer is actually fairly complex. It's clear that the Teenage Mutant Ninja Turtles must have some source of income. While many of their belongings are made, (more on that in a moment,) things like food certainly would still require some sort of capital. (All that pizza can hardly be free, can it?) So where do they get money? Let's take a look!

They Don't Need Much

Firstly, remember that the Ninja Turtles' need for money is really quite low. Nearly everything that they own, including weapons and technology, has been made from whatever they could find at dumps, left in abandoned places, and such. As we see in the 2003 series, Leonardo has skill as a swordsmith and makes his new blades out of scrap metal while Donatello builds technology and machines out of whatever he can find. And, of course, they don't have to worry about things like rent. Clearly, they don't require as much money as others might.

As I've mentioned, in the comics and various series, we see Splinter and the Ninja Turtles scouring the sewers, junk yards, dumpsters, and such for useful items, but it's possible they may be looking for more than what they can use themselves. There is some evidence to suggest that they also seek out things that can be restored and resold. In fact, in both the comics and the 2003 series, April O'Neil's ownership of an antique/junk store comes in handy. If I remember correctly, one episode of the aforementioned series features one of the turtles stating that a found item "looks valuable" and should be taken to April's shop. So it seems quite possible the Heroes in a Half Shell find and repair anything that might sell well and then deliver it to their human friend in exchange for a cut of the profit.

They May Have Side Hustles

Alternatively, some of the later series, such as the one from 2012, depict some of the Ninja Turtles taking on odd jobs in exchange for money. In particular, we see Donatello working part-time in tech support--a job he'd probably excel at. Similarly, the same series depicts the Ninja Turtles helping a pizzeria owner who is being threatened for "protection money" by the Foot Clan. Afterward, the grateful restauranteur regularly gives them free pizza. As far as I know, neither of these things occur in the comics or the other series, so both may be up for debate, but that doesn't mean they aren't possible. The latter definitely seems likely, although many question how the former could happen given that Donatello almost certainly has no social security number and therefore would have a hard time being hired by a tech company. These aren't the only such instances, however. As mentioned by another poster, one comic features Mikey working as a supposedly costumed children's entertainer while another shows Raph reselling valuable comic books. (In the 2003 series, it appears Mikey may be doing this as well; we see him carefully sorting comic books and putting them in plastic slip covers.)

They Find Money... Sometimes in Pockets

While some argue the feasibility of the turtles working, there are other sources of income that appear to be more widely accepted. Firstly, there is the simple fact that the turtles likely gather up all of the loose change and dropped bills they can find. In a busy and largely pedestrian city like New York, there must be a lot. (It should be noted that this is more a fan theory than canon, but it certainly seems probable.) Secondly, returning to the 2003 series, which sticks closest to the original comics, we find a somewhat darker mode of gaining necessary funds. Although they always return stolen money, as seen in Things Change, another episode, Touch and Go, shows us that the turtles are not above keeping cash found on defeated enemies. Granted, in this particular case they give most of it to an old lady in need, but, presumably, they have kept such windfalls before. (No one seems at all shocked when Michelangelo proposes keeping money taken from two assassins who'd been paid to attack he and Splinter. In fact, they all behave as if this is a normal procedure.)

So, there you have it! The most likely sources of money for the Ninja Turtles are reselling repaired items with April's help, gathering up dropped coins and bills, working side jobs, and looting Bad Guys for cash.

There are ALOT of ways to explain this away, like taking the money of the criminals they beat up, doing odd jobs that allow them to conceal there identities, etc. None of these explanations work when it comes to the 1990 movie though as it was there FIRST time out fighting and using their ninja skills, thus there was no history of them previously fighting criminals and taking there money. Nor is it suggested that they do odd jobs on the side either. The ONLY explanation I can think of that makes sense is living in sewers and only traveling out at night, that they would scavenge would they could find (alleyways, dumpsters, sewers, etc) fix and sell anything of value to a pawnshop (Donatello and electronics?). As to how they sold these items while keeping their idenity a secret is mystery to me, maybe it's just as simple as leaving the items at a pawn shop at night with a note saying how much they wanted for it, though that leads to another conundrum, how would they collect the money? A brown trench coat is not going to cover up your entire body, especially your face. Of course this a HUGE explanation which none of it is mentioned in the movie.

I have always (since the late 80s) believed that April O'Neal gives them the money out of her income from being a news reporter.

78
How do the Turtles get their pizza?