What does Chirrut mean by “The strongest stars have hearts of kyber?”

I was just reading the comic book adaptation of Rogue One: A Star Wars Story, and this line by Chirrut Îmwe caught my attention: 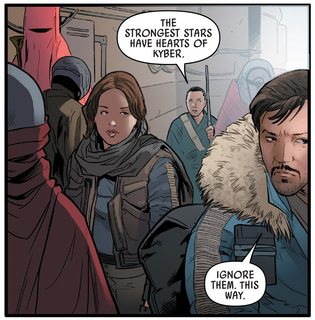 The strongest stars have hearts of kyber.

This line is exactly the same as in the original film.

What does Chirrut mean? He can't be speaking about the Death Star, which used them as fuel, because there is no way for him to know about that (unless the Force told him and he forgot to mention it to others).

He could be speaking about the lighsabers, or maybe Jyn herself - this appears to be what countless speculations on the Internet say. Is there a more canon explanation, or maybe something that was said behind the scenes?

The suggestion appears to be that Kyber crystals are an exotic form of solid degenerate matter.

Degenerate matter is organized so that all electrons occupy densely-spaced, minimal, non-overlapping energy states normally caging an alarming amount of ordinary nucleonic matter. A teaspoonful of White Dwarf matter, you may have heard, weighs 5.5 tons. 99.995% of that mass though, is the ordinary-matter nucleons trapped in a degenerate-electron matrix. The electrons in that teaspoon weigh a mere 8 ounces.

It could even exist under ordinary conditions; For although created through terrific pressure, the degenerate matrix actually needs more energy to expand once formed than it can absorb from its environment. Its density, about 46 grams/cc, would be low enough you could handle it like an ordinary object merely twice as massive as platinum.

Such an all-electron degenerate matter crystal would have useful properties. You could channel enormous amounts of energy into it and out of it and use it as a perfectly efficient photon emitter. If you pushed it hard enough, it would implode into an instant antimatter explosion yielding 551-keV gamma rays, which could be used to pump an x-ray laser.

Where would you find Kyber? Most likely on a planet formed from a ruptured degenerate star. A crystallized star would tend to rupture if ordinary matter accumulated on its surface until the overburden pressure (the weight of the piled-up matter) triggered thermonuclear fusion in its core. This is called a Type 1a Supernova. Matter flees the scene at about 3% light-speed, so it takes some doing to slow it down and incorporate solid fragments in a planet!

In the universe of Star Wars, Kyber Crystals are more normally employed as force conduits than weapons fuel. That's how lightsabers work -- they guide power from what's basically a multi-megawatt-hour battery into a blade field. It's also a truism that only a living thing can wield a lightsaber, because Kyber crystals only respond to living users.

It can also mean something less literal. He says this after meeting Jyn who has the Kyber crystal around her neck. And both because of age and his post as a guardian of the whills it makes sense he knew Jedis, who used Kyber crystals in their sabers. Saying the strongest stars have hearts of Kyber can be more a connection to these strong people he has met in his life.

And look at Jyn when he first meets her here, still on the defensive, still on the road of her character development to become one of the heroes of Scarif. Telling her this was his way of telling her he can sense the strength in her.

That being said this is a galaxy far far away and we don't know how physics work in it so it might also be literal.

The strongest stars have a heart of Kyber.

What is the strongest star he is referring to?

I would suggest what he meant was that the "Brightest" stars have hearts of Kyber meaning that they give off the most light, so to have a heart of Kyber means that you are a shining star. Stars float in the blackness of space, the Empire could be compared to the darkness, we can only find our way as long as we have the light.

Not the answer you're looking for? Browse other questions tagged star-wars comics rogue-one chirrut-imwe or ask your own question.

26
Was Chirrut Îmwe a Jedi, Force-sensitive, lucky, or something else?
9
Does the Death Star use Kyber crystals as fuel?

36
What does Sidious mean?
12
What does the -tooine suffix mean?
29
What does 'E chu ta' mean?
30
Does this cut material from Rogue One still appear in the novelisation?
9
Does the Death Star use Kyber crystals as fuel?
8
Could Chirrut Îmwe have constructed a lightsaber out of Jyn’s kyber crystal?
7
Does the kyber crystal used in a lightsaber have an effect on the user?
4
What does the colors mean for the Galactic Empire ranks?