What kind of buildings do the wood elves of Mirkwood live in?

Thranduil lives in Halls under the mountain, in halls built with the aid of the Dwarves. But do the rest of his people live in the mountain with him, or do they live outside in the wood?

From Legolas' description of the Galadhrim (the tree people) I assume the elves of Mirkwood do not live in the trees like the Galadrim.

This question has been inspired by a discussion about a piece of fan art posted to a facebook group that purports to show the Mirkwoodian elves. 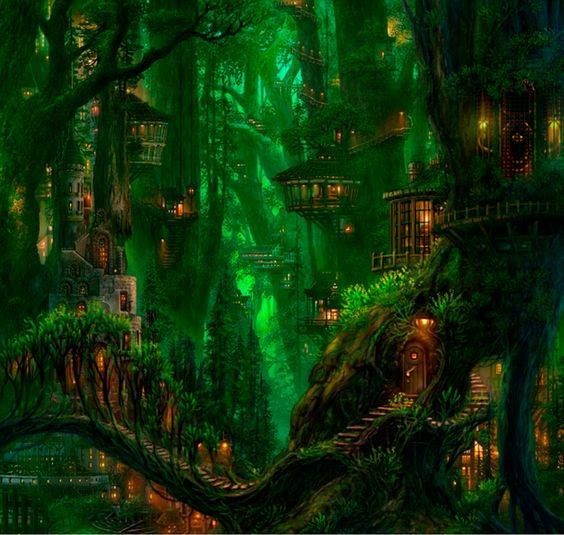 I think it looks like a generic fantasy image, rather than of Mirkwood elves, but then I realised that I don't know how they actually live.

Houses or huts on the ground and in the branches

In fact the subjects of the king mostly lived and hunted in the open woods, and had houses or huts on the ground and in the branches. The beeches were their favourite trees. The king's cave was his palace, and the strong place of his treasure, and the fortress of his people against their enemies.

The Hobbit, Chapter 9, Barrels out of Bond

The majority of Thranduil's people lived in such buildings. The minority;

In a great cave some miles within the edge of Mirkwood on its eastern side there lived at this time their greatest king. [...] This great cave, from which countless smaller ones opened out on every side, wound far underground and had many passages and wide halls; [...].

The Hobbit, Chapter 9, Barrels out of Bond

Certainly, the Halls of Thranduil were quite big, and it's very likely that the minority of the Mirkwood elves lived in the palace itself.

32
How do the Elves in LOTR (canon) obtain their food?
25
What happened to elves when they died or lost the will to live?
6
Did Saruman rescue Gollum from the Wood-Elves?
2
How much magic did king Thranduil and the elves of Mirkwood possess?
36
Does any of The Hobbit's negative impression of Wood Elves survive in Tolkien's other writing?
5
What factors affect Elves starving?
38
Did the Elves do mathematics?
12
What is the name of the Mirkwood elves' realm?
33
Where did Thranduil buy his wine from?