I'm trying to find a "choose-your-own-adventure" type book I read as a kid in the early or mid 1990's in Canada. Here's what I remember:

About the book itself

I had this books for years, but I had accidentally donated it to a used bookstore a while back. Thanks in advance for any help identifying this.

Found it: It is Kidnap in Space by Peter Milligan, a part of the Intergalactic Quest series of choose-your-own-adventure books. 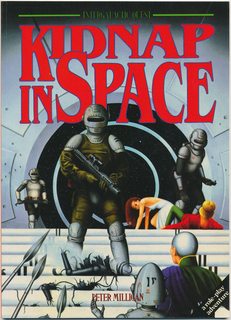 Not the answer you're looking for? Browse other questions tagged story-identification choose-your-own-adventure or ask your own question.

5
Story/book identification - Star Wars Choose Your Own Adventure, fighting Boba Fett
14
Old (1950s? maybe 1960s) space adventure for boys anthology
4
Space piloting through layers of space, pirates and implants
6
What was the name for a Choose your own adventure style book in space?
11
Zany parody of choose your own adventure?
6
Book: Choose Your Own Adventure, You Shrink to Enter a Human Body