Who is this hairy man?

In Final Crisis, there's a scene when Nix Uotan is thrown into a cell, along with others who are immune to the anti-life equation. Two others are in there - one is Metron in the body of a handicapped man, and the other is some very hairy man who provides some exposition.

Who is this hairy man? At first I thought it was Bobo T. Champanzee, but I couldn't find anything that supports that claim.

Here's the scene in question: 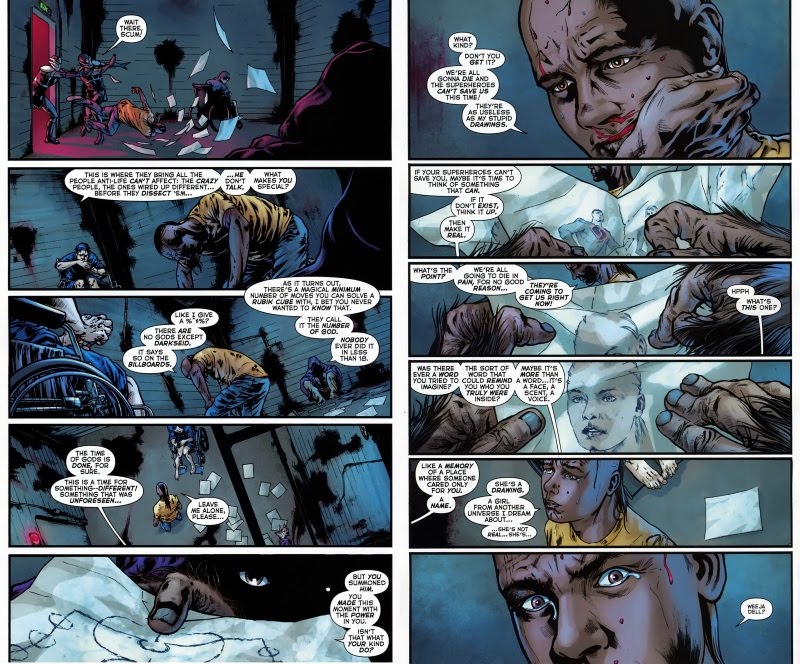 The wikia for the issue names the character as "The Mystery Anthropoid" in the characters section and has the following to say about who he could be.

The identity of the Mystery Anthropoid has been much discussed. Several possible true identites have been suggested, from Sam Simeon, to Big Bear of the Forever People, to Highfather himself.

The person with the ape hands in this issue is never explicitly named, although the best theory I’ve heard is the typewriting monkey from Grant Morrison’s Animal Man run. Note that the monkey is even referred to in Superman Beyond. And like the typewriting monkey, the character in Final Crisis #5 knows a whole lot about the power of stories. Heck, this very well could be the origin of the monkey (a being experimented on in Command-D)! But really, that’s just a theory. It is mostly a mystery who the ape hands man is.
CBR, Final Crisis “Cliffs Notes”

Who was that ape man that was imprisoned with Nix Uotan and the rubicks cube solver (Metron?) in Darkseid’s lair?

One interesting answer I’ve heard was an experimented on Himon, as Himon was the creator of the motherbox, so it would follow that he would create the motherboxxx that was contained in the Rubik’s Cube, no?
However, Morrison I believe has stated that no New Gods survived (until the Fifth World, of course), so that likely rules Himon out.
That leaves the type-writing monkey from Animal Man as the leader, which is possible enough, as the monkey sure would know about the power of stories, wouldn’t he?
Wouldn’t it be a kick if this was the “origin” of the typewriting monkey from Animal Man? That he was created in Command-D!
In any event, basically it is unknown for sure.
CBR, Final Crisis FAQ

However, these are all just theories and it appears the character has yet to be named.

More conjecture, I'm afraid: However, if you pay close attention to another page, in Nix's apartment; there's a Rubik's cube on his desk and a stuffed monkey on his bed.

And this is a parallel to his cell: Metron has the cube and the stuffed monkey, apparently named "Mr Stubbs" becomes alive and dressed like a pirate.

So this could be a reference to Moby Dick (considered the greatest story ever; since Nix's powers are derived from stories): because Mr. Stubbs is the second mate on The Pequod in Herman Melville's classic tale.

11
Who are left-most & right-most DC comics superheroes in this image?
20
Who is this superhero?
10
Who is (was?) this DC Comics villain?
4
Who is this giant spider creature?
3
Who is this female character near Aquaman, painted by Stjepan Sejic?
8
Who is this Marvel Comics character?
8
Who first said this iconic Superman line?