Who was the first sci-fi/fantasy character to be betrayed by their cape?

When you are a sci-fi/fantasy character, hero or villain, you might be tempted to wear a cape.

Capes are cool. You look cool with a cape, you can hide secret weapons in it, and depending on your author's perception of science, you get more aerodynamic when flying with a cape.

Artists also seem to think that the cape's coolness is directly related to its length, even when that leaves you with Batman basically being dressed up in a black wedding dress train.

Unfortunately, for all its coolness, your mighty cape might be the premise of your demise, as shown by this shock-campaign PSA:

Well, of course shock-campaigns are extreme. Earlier archives inform us on how even the most common act of walking can put you in uncomfortable situations: 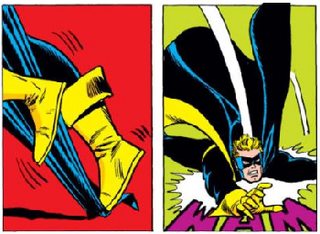 If you are interested in other examples with more context, you can take a look at this webpage established by a committee of people dedicating their lives to list fellow characters who walked into common tropes.

Make no mistake, greater characters than you have been faced with this situation before... but, who was the first? 1

1 No particular media. Comics, novels, short stories, TV shows... are all welcome, as long of course as they're sci-fi/fantasy. Also, death is not mandatory - could just be a chase slowed down by a cape tangled up in branches, such as Snow White (1937), which still seems quite late.

To clarify, I mean "first" by order of publication, not by "age of the character" (a Roman SFF Centurion having his cape stuck in a branch in a 2010 movie won't count, for instance).

The earliest reference I could find was the Celtic folktale "The Buried Moon" reproduced in Edmond Dulac's The Fairy Book from 1916. In the story the moon shines so brightly on a bog when full that it is said to be as bright as day. The moon, hearing of this, decides to attempt the walk herself. Wearing a cloak and hood to hide her identity she attempts to cross the bog only to have her cloak snag by an old tree. She becomes mired in the bog. When a passing man comes to her aid her hood, still snagged by the tree, comes off, revealing her identity.

Not the answer you're looking for? Browse other questions tagged history-of clothing or ask your own question.

10
Was Edna Mode's "No Capes!" rule inspired by Dollar Bill?