I work in a library and we had a young patron give us a description of a children's picture book that she can't remember the title of.

She's been looking for this book for a long time and no one seems to be able to make sense of what she's provided. It would have been helpful to have a date on this book but she's only in 5th grade so I don't think book dates are something she would stop to look at.

This is exactly what she wrote:

I can't find anything that exactly matches the description or the white book cover, but there are a couple of tie-in children's books to The Ewok Adventure films (Caravan of Courage & Battle for Endor), such as

The Ring, the Witch, and the Crystal:

The Ring, The Witch, and The Crystal: An Ewok Adventure was a children's book that was released in 1986 and tied in with the TV movie, Ewoks: The Battle for Endor. 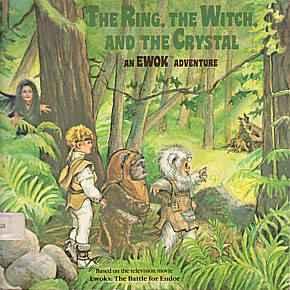 and adaptation of the novel with a record, The Battle of Endor (book-and-record)

There is also a 2013 Dark Horse Comic that features the Ewoks and the Night Sister (witch), Charel (a female villain featured in The Battle for Endor), Ewoks: Shadow of Endor

What's also sort of interesting about your description, is that the Ewok cartoon series, which also spawned children's books, did feature green fury goblin-like characters called Duloks and some of the Ewok's hood's/headwear were more "pop-colored" with Princess Kneesa wearing a pink hood or there was a transition with Wicket wearing a green one at some point.

I remember a made-for-television movie that matches, which is "The Ewok Adventure" (Caravan of courage). Maybe they made a picture book from it. You can find the movie description here.

"The Ewok Adventure" is a followup TV Movie

26
Collection of fantasy/horror short stories with one or two full color illustrations per story
2
Illustrated children’s fantasy book, including a giant eagle and a phoenix having a battle
9
Trying to Find a Children's Book from the 1970s (or prior) about a “Monster” Chasing a Child or Children
11
Children/ Young Adult Fantasy Book featuring fairies
6
Children's novel with an asian girl going on adventures in a spaceship
8
Book where bodies stolen by witches. Band of gold to prevent the switch becoming permanent — used yellow knitting wool