Read a comic from the library back in 1993-1994, probably from the late 80s/early 90s. Short story, colorized, likely anthology format.

Story line along the veins of Conan with heroic male protagonist and a female companion on a quest. Both scantily dressed. Fighting enemies that included skeletons if I recall correctly. They were going through a cave/dungeon and spent the night enjoying each other's company.

The drawings are more stylized, gritty, cleaner and less crowded with less dialogue compared to all the Conan comics I reviewed. Definitely more adult tilted themes and unlikely a Marvel publication. I suspect it was published in something similar to Heavy Metal (that said, I don't recall any nudity or anything along those lines, so less "adult" than what you could see there).

It was probably an individual issue of something, rather than a collection; I recall it being rather worn out, hence the time range. This wasn't the only comics story in the publication. This particular story wasn't very long - probably around 10 pages. Unsure if it was serial story that continued, or something standalone.

You may be thinking of Ka-Zar . I remember having these books in the early 90s. It is fairly similar to what you mentioned.

Brief blurbs from the Wikipedia article:

Ka-Zar (/ˈkeɪsɑːr/ KAY-sar) is the name of two jungle-dwelling fictional comic book characters published in the United States. The first Ka-Zar was named David Rand, and debuted in 1936, first appearing in pulp magazines of the 1930s. In 1939 he was adapted for his second iteration, a comic book character for Timely Comics, the 1930s and 1940s predecessor of Marvel Comics. The second and more prominent Ka-Zar was named Kevin Plunder, and first appeared in 1965. He is a heroic character appearing in American comic books published by Marvel Comics.

After the Savage Land became known to outsiders after the visit by the X-Men, many people began traveling to the territory. Ka-Zar has also become romantically involved with female visitors, the first being S.H.I.E.L.D. agent Barbara Morse (who later became the Avenger named Mockingbird). He first battled A.I.M., and met the Man-Thing. He then met Spider-Man once again, and battled the extraterrestrial Gog. He next met the adventurer Shanna O'Hara,. He battled Klaw, and visited other dimensions. He and his allies faded mysteriously from that other dimension, then teamed with the X-Men to battle Zaladane and a reborn Garokk.

Could it possibly be a comic adaption of the Conan story "Lair of the Ice Worm" by L. Sprague de Camp and Lin Carter?

The plot description from Wikipedia certainly matches your description. Conan and Ilga are attacked by subhumans, who I suppose could be interpreted/drawn as skeletons, then they spend a night in a cave where they get it on.

Tiring of the icy lands of the Aesir, Conan is traveling through the icy wastelands north of his home country, and finds himself protecting a girl named Ilga, who is attacked by a tribe of savage subhumans. With night approaching fast, and Conan's horse killed in his battle against the savages, they take refuge in an ice cave, despite Ilga's seemingly irrational fears of something she merely calls "Yakhmar", failing to elaborate. After building a small fire, they make love and then rest.

It was adapted in comic form in Savage Sword of Conan #34. Here's the cover showing them scantily clad, despite the ice setting. Artistic licence I suppose. 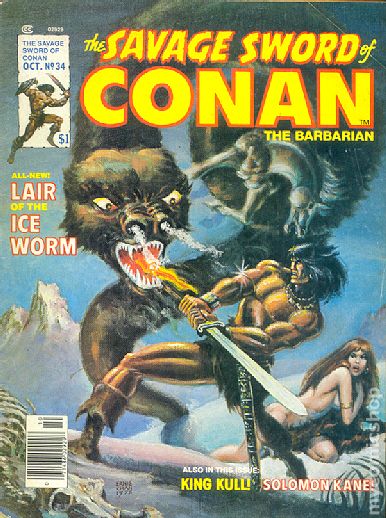