Starts off with a man waking up in cave or buried chamber. He receives info and instructions from a A.I. super computer . (Its been xx years 30? 60? 100? since the collapse of society. The computer's scanners (Satellites? Camera?) are not working anymore and it needs him to scout around and find out whats happening, return, and report back to it what he finds.

Unbeknownst to him, his body has been modified to assist him in surviving, and he has no knowledge of anything from before he awoke. He is stronger, has more stamina, needs to eat less often, and armored bones? (I believe at one point he gets shot but only gets a serious flesh wound, instead of a critical injury because the bullet bounces off a rib instead of penetrating his chest cavity)

Three things I remember from the story.

I believe he addressed/referred to the computer as "Machine"

It is possible the word Machine was in the title. (i.e. "Machine's Man" or "Working For the Machine".)

I think this might be "Spawn of the Death Machine" by Ted White (1968). The Goodreads description is a partial match:

"You are an artificially constructed human being, a mobile data-gathering device." That is what the computer's metallic voice tells Tanner when it releases him from his cell. Naked, unarmed, with no memory to guide him, he emerges into a savage world, into the ruins of Manhattan in the twenty-third century where wild animals roam and men have become cannibals in a frantic struggle to survive. Who has unleashed this chaos upon the world? Has Tanner really been dispatched to gather facts to help save the tragic remnants of humanity? Or is he to be the final instrument of destruction?

This review confirms more of your clues:

When his captors beat him Tanner gets angry, and goes Lou Ferrigno on them, killing their leader with his bare hands. Tanner, it turns out, is super strong. Accompanied by Rifka, a teenage girl

Another town, cut off from the rest of the world under a geodesic dome, is run stringently on eugenicist lines by a cadre of scientists who maintain a society of exactly 500 men and 500 women, and breed them for intelligence and other desirable genetic attributes. 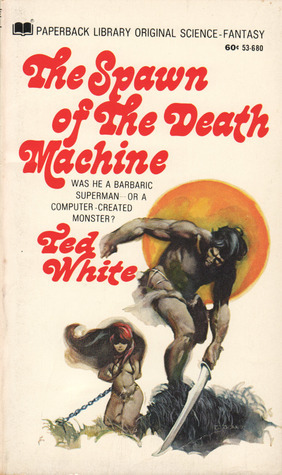 Not the answer you're looking for? Browse other questions tagged story-identification novel post-apocalyptic artificial-intelligence cyborg or ask your own question.

8
Identify the sci-fi movie based on Max Steel character
7
AI novel- man builds female computer, falls in love, she becomes possessive
3
Book about apocalyptic event involving aliens
9
Story about a man going insane because of his obession with computer c.50s-60s?
6
90s? novel about an ordinary man pulled into a world of magic
16
Sci-Fi novel about a man that has the power to make everyone he meets forget him
14
What was the first sci-fi reference to one's life/being leaving the biological and becoming part of the machine/program?