Book set on Mars with a hermaphrodite character

Trying to find the name and author of a SF book I read in the 1970s. It was set on the terraformed Mars of the far future and written in an arty, experimental style. Wealth was unlimited so the characters had everything they needed. The Martians were described as having black hair that was iridescent like all colors of the rainbow. One character was a hermaphrodite named Sysiphos or Sisyphus. She/he had sex with a sibling. When male Sisyphus was referred to as he, when acting as female, she -- as a she she went by the name Sissy. At one point Sissy seduced the teenage son of a politician on Mars and ran into a lot of trouble. I think this book might have serialized in Analog or Fantasy & Science Fiction magazine.

Book was A Double Shadow, by Frederick Turner, published 1978 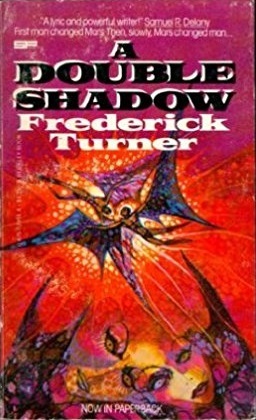