Kobayashi Maru - Any known connection to a real person or incident?

While looking up something about the Truk Lagoon, I found that the Japanese naval base there during World War II was commanded by Vice Admiral Masami Kobayashi.

Vice Admiral Masami Kobayashi ordered that all naval assets be moved from Truk to other bases, knowing that there was not time to move all ships and personnel and that there was no time to mount a workable defense - Truk and most of its ships and personnel were doomed no matter what action he took. The Truk naval base was indeed destroyed, and most of its ships and materiel was sunk in the lagoon.

That sounds like the basis of the Kobayashi Maru test in the Star Trek series - you are sunk no matter what you do.

I searched a bit (this site and the internet in general) but I didn't find anything that indicated that the authors who devised the "Kobayashi Maru" test knew of Vice Admiral Masami Kobayashi. Most of what I turned up indicated that the origin of the ship's name "Kobayashi Maru" is unknown - mostly just speculation that "Kobayashi" is a made up word, though as it turns out it is indeed a normal Japanese name (I have since found other people with that name.)

Has anyone ever seen or read anything where one of the authors of "The Wrath of Khan" explains the "Kobayashi Maru" test, and maybe explains how the name was chosen?

The Truk Lagoon is a somewhat famous place for divers - the wrecked ships are not very deep, and therefore accessible to many divers (provided they can make the trip to Truk.) I first read about it in a National Geographic article some time in the 1970s. The article was mostly about diving in the lagoon, and included a lot of photos of the wrecks.

My son reminded me of it this morning. One of his friends has bought a large aquarium, and intends to build a sort of WWII diorama for the fish to live in. The thought of wrecked tanks and trucks underwater reminded me of Truk Lagoon, and here we are.

"I'm not the age I am and I'm not settled. I've still got an awful lot do accomplish. I don't want to just settle in and be permanent anywhere," he says. "There's a lot of me philosophically in the script. I don't believe in the no-win situation, the Kobiashi Maru [named after his former neighbors in Hancock Park]. Kirk's solution to the Kobiashi Maru was legitimate. Nothing limits you except yourself."

The answer available, for in-universe explanation is, not canon:

Kobayashi Maru was an actual freighter

The incident was non-canonically presented in the novel entitled Star trek Enterprise: Kobayashi Maru by Micheal A. Martin and Andy Mangels.

The freighter was lost in the Tezel-Oroko system, near the Federation-Klingon border in the year 2155. This was used as the basis at the Starfleet Academy for the cadets using the same name as that of the ship: "The Kobayashi Maru Scenario".

There is an actual container ship called the Kobayashi Maru from Japan. It is named after an Admiral of the Imperial Japanese Navy who later served with the Japanese Maritime Self Defense Force.

Oddly enough there was a Kobayahsi Maru scenerio for the Admiral during WW2. He was in charge of the naval base in Truk Lagoon. He was notified that there was going to be an attack on the base but had little time to move his ships out of the lagoon. Any that would have been moved would have been sunk in open water, or they could be sunk in the lagoon. He ordered ships to Palulu but most of his ships were sunk and he was relieved of command two days later. Truk is a popular diving spot due to the number of ships sunk and the low water depth. 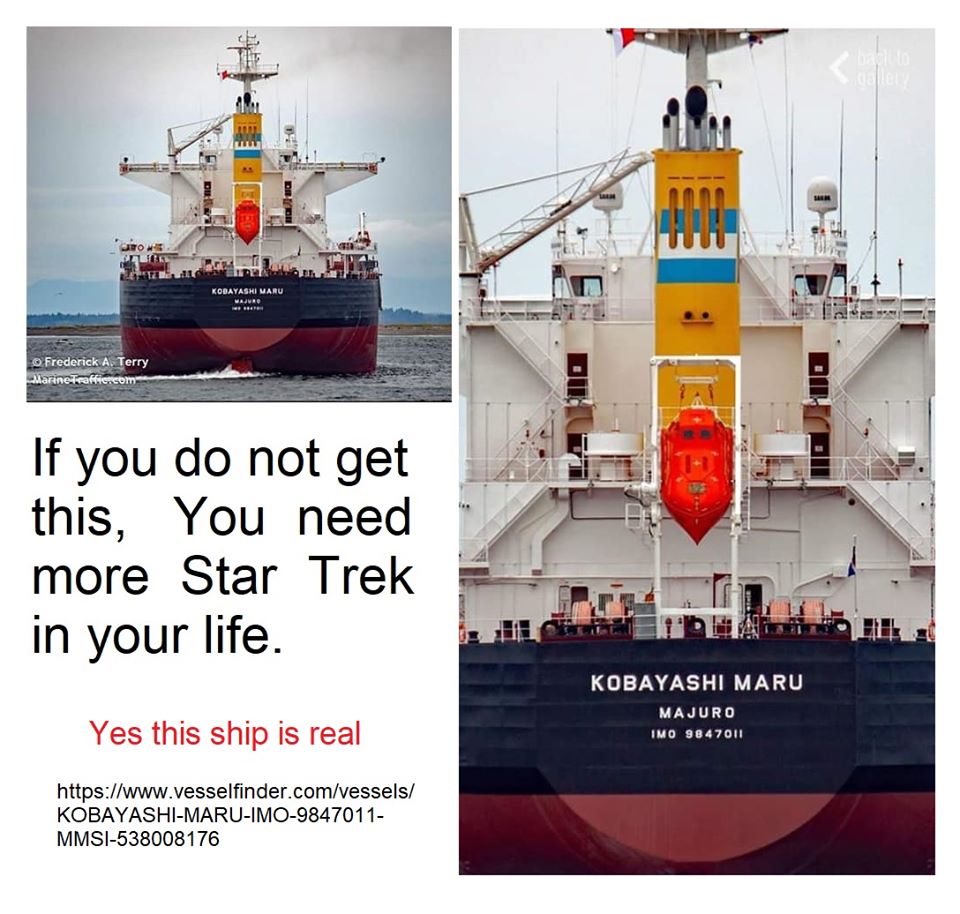 Not the answer you're looking for? Browse other questions tagged star-trek the-wrath-of-khan kobayashi-maru or ask your own question.