Timeline of The Witcher tv series

I have just finished watching The Witcher on Netflix and I am completely lost as to the timeline of events depicted in the series.

It is obvious to me that Ciri's escape is happening in the present, while both Yennefer's and Geralt's stories happened some time ago; but I didn't realise that until some time into Ep 7. Before that I was sometimes confused but believed that the story was linear and jumping back and forth between the three characters.

During Ep 8, Yennefer mentions that she has lived through three human lifespans, which places her training perhaps 200 years ago; but Geralt's first appearance is as a fully fledged Witcher, no idea how long ago (disregarding Geralt's obvious flashback to his childhood).

Is there any time reference that I missed in the TV series? Did I perhaps get the whole thing wrong?

In an interview with one of the showrunners, Lauren Schmidt Hissrich, she says:

If she was, say 20, when she went to Aretuza, she would be 90 towards the end of the show. Perhaps not 3 lifetimes, but certainly 2.

As I watched, the details I caught that led to realizing the [timelines] were:

Those are just the ones that I caught and I wasn't trying to pay too much attention once I realized the timeline differences. This Screen Rant page includes many other smaller details that I missed. It also includes this timeline from dates in the novels:

Specifically for the Netflix television show the entire timeline of major event is listed here.

I've just watched the series, and I agree with your confusion -- it took me several episodes to realize everything we saw Geralt and Yenefer do was fairly far in Ciri's past. There were clues, but they took some time to sink in.

It's clear, however, that mages live longer than ordinary humans, as do witchers. Geralt's reputation as the Butcher of Blaviken is widespread by the later episodes, yet it didn't exist in the first (because he hadn't killed Renfri and her men yet). We aren't really given a time scale for Geralt, other than that Jaskier was still alive and still singing when he met Calanthe and Eist at Pavetta's betrothment.

To me, Jaskier's presence at the Blaviken incident, along with his presence at Pavetta and Duny's wedding, suggests that this was a span of no more than a few decades. Yenefer also mentioned spending three decades at court before she broke with the Brotherhood.

Therefore, there's a bit of a time conflict in her statement about "three human lifetimes" -- also, near the end, it appears that Geralt at least subconsciously expects his mother to still be alive. To me, that suggests that, though Geralt might be much older, Yenefer is only around 40-50 years out of the Tower (so 60-80 years old) at the time Geralt and Ciri find each other. Then again, in that setting, 80 years might be approaching three normal peasant lifetimes.

There are three timelines depicted in the show: Yennefer's, Geralt's, and Ciri's. Each character's story is linear, but they start at different times in history, sabe move at different paces, all coinciding by the final two episodes.

There are many hints within episodes as to the fact that our protagonists' events are not happening concurrently, and Netflix has released multiple official timelines with exact dates to clarify three ordering of events, but there are unfortunately a few contradictions in these, and between these and the in-show dialogue.

Here is an approximate timeline based off of the official Netflix dates: 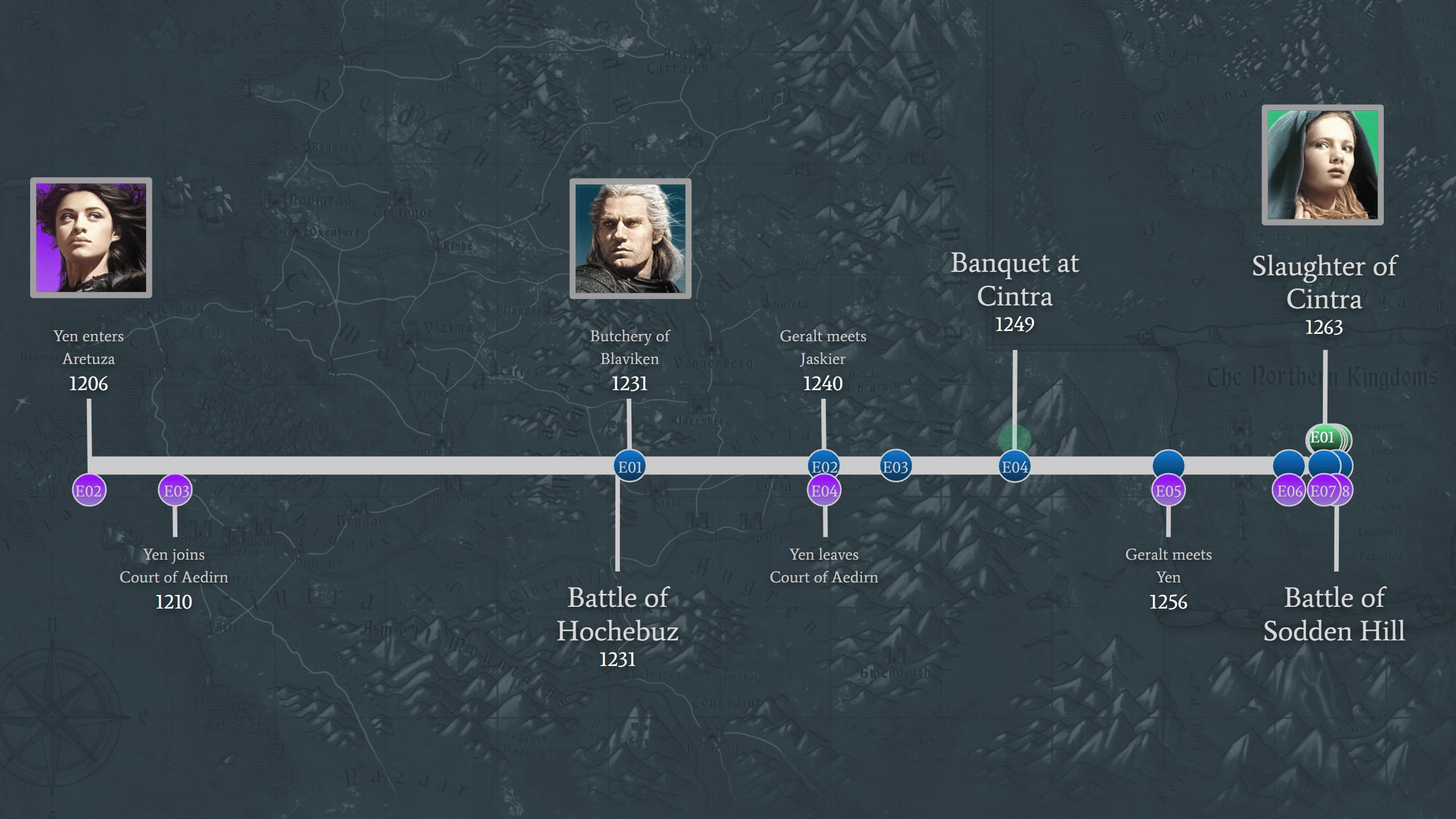 Not the answer you're looking for? Browse other questions tagged the-witcher chronology or ask your own question.

8
Approximate age of Geralt when he is getting Ciri
5
Viewing requirements for Netflix's The Witcher
5
Timeline of All Witcher Games/Books?

31
The ending of the Witcher saga
8
"Season of Storms" epilogue explained
5
Timeline of All Witcher Games/Books?
6
What potions does the Witcher Geralt take before battle?
14
What is the lifespan of a Witcher?
2
Different magic users in The Witcher series?
5
Watch order for the Netflix Witcher series
5
What is the distinction between Elders and elves, if any?