Why is Rorschach's mask symmetrical?

Is there is any explanation for why Rorschach's iconic black-and-white mask in Watchmen (and likewise the dress that the mask was originally made from) is symmetric about the center line? 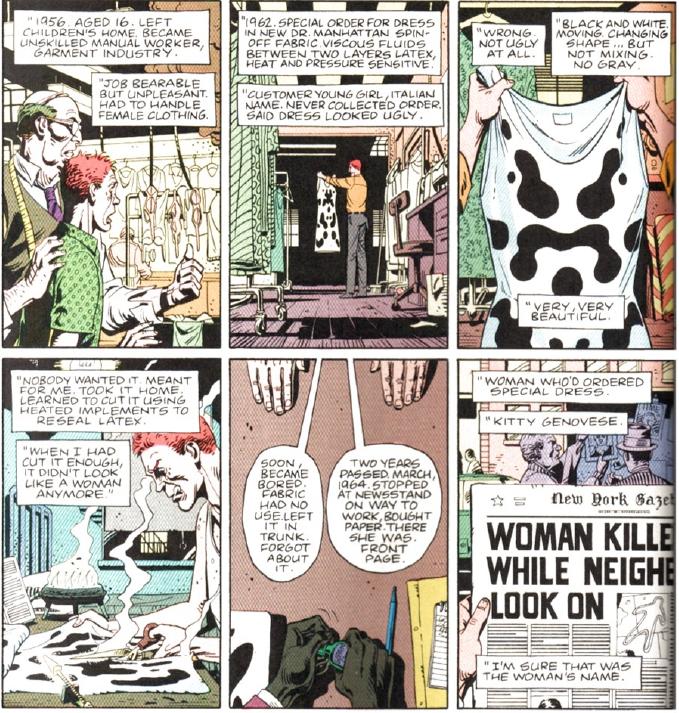 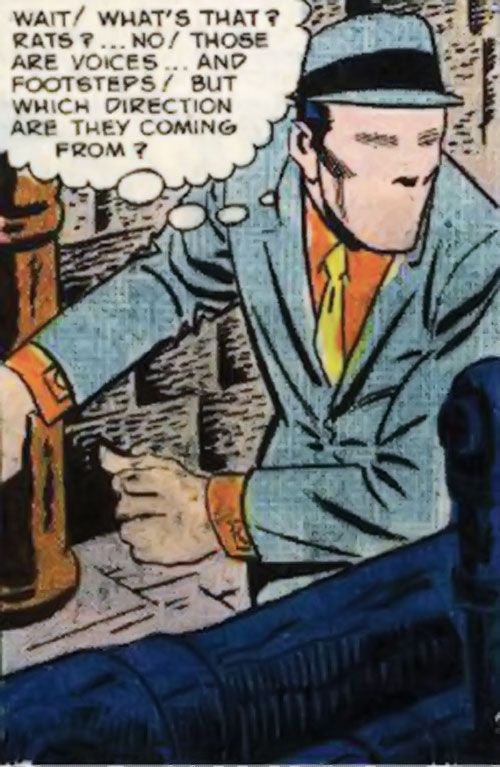 The Question was an obsessive crime fighter who wore a blank mask to hide his identity. The facelessness (whether Rorschach's or The Question's) is a key feature of the character, so Moore had to design a new similarly masked character when D.C. decided that they did not want him to use the heroes from the Charlton Comics stable. He hit up on the idea of a character with the Rorschach inkblot test theme — with its black-and-white imagery and suggestions of mental problems.

The Rorschach inkblots were originally created by blotting India ink between the folded pieces of card. Thus, they were bilaterally symmetric. 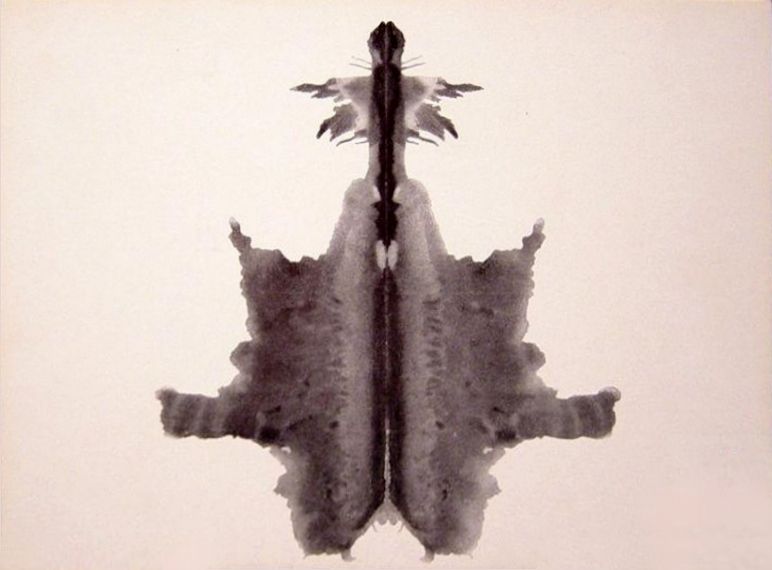 However, the explanation in the comic for how the dress material was created does not seem to suggest any reason why the pattern should have an axis of symmetry. Was this addressed somewhere in the original Watchmen series/graphic novel, and I just missed it? And if not, has it been dealt with in any other works set in the Watchmen universe?

As the comic states, the material is "heat and pressure sensitive", and this is what determines the black and white portions. This means that the pattern on the mask will be based on the pressure and heat applied by his face.

Faces are, along with the rest of the human body, pretty much symmetrical — so the heat and pressure pattern it produces would be (roughly) symmetrical too. Presumably, if Rorschach were to make an asymmetric expression on his face (more a lopsided grimace than simply raising an eyebrow), then the mask would also not be symmetrical at that point.

You haven't missed anything. It is just never addressed in the Watchman universe why the pattern is always symmetrical. The reason it is not addressed is because it does not have to be addressed.

The reason why it doesn't have to be addressed is because the characters name is Rorschach named after the famous Rorschach Test.

The Rorschach test is a psychological test in which subjects' perceptions of inkblots are recorded and then analyzed using psychological interpretation, complex algorithms, or both. Some psychologists use this test to examine a person's personality characteristics and emotional functioning. It has been employed to detect underlying thought disorder, especially in cases where patients are reluctant to describe their thinking processes openly.- Carl B. Gacono & J. Reid Meloy 1994 The Rorschach Assessment of Aggressive and Psychopathic Personalities

And a (proper) Rorschach Test is always symmetrical, this is due to the descision of the creator of the test.

"Asymmetric figures are rejected by many subjects; symmetry supplied part of the necessary artistic composition. It has a disadvantage in that it tends to make answers somewhat stereotyped. On the other hand, symmetry makes conditions the same for right and left handed subjects; Furthermore it facilitates interpretation for certain blocked subjects. Finally Symmetry makes possible the interpretation of whole scenes." - Hermann Rorschach in the book "Measurement and Evaluation in Psychology and Education"

If you are not asking WHY the pattern has to be symmetrical, but instead asking HOW the changing shapes of his mask are always symmetrical on the other hand... well there is never an explanation given for that either. It just is as it is without ever been given an explanation, perhaps in a purposefully way to add more mystery to the character in a world where most characters are more grounded then in other comics.

32
Did Rorschach's mask react to his emotions?
29
Why was Dr. Manhattan blue?
23
Why did Ozymandias think that the intrinsic field trick would work?
11
How does Bruce Wayne mask Batman's injuries between beatings?
20
Why does Batman's mask always leave a gap to show his face?
117
Was Rorschach's Pagliacci joke a real joke?
4
How does Bane's mask work?
15
What is the fluid in Rorschach's mask?
19
Why was New York attacked and not Moscow or another city?
8
Why didn't Ozymandias kill the Comedian with a gun, or a knife?