What was the animated kid's show about teenagers who could go inside of a computer game and play as a monster-like character? It almost looks like World of Warcraft. One of the main characters plays as a green Hulk-like guy and one other character plays as a red monster? It would’ve been on TV around 2004 to 2015. I remember that if a character died while playing the game they could never play the game again.

I suspect this is Chaotic as per Cartoon about a group of teenagers whose souls travel to multiple worlds with monsters. 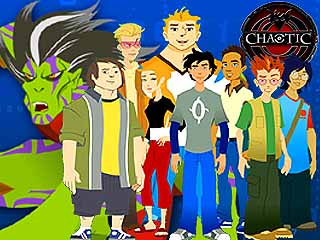 The second part is Perim. In Perim the creatures, locations and items from the game are real. Players from the Chaotic game can teleport into Perim and scan the locations, creatures and items with their scanners, gaining the ability to use them in their game. There are four tribes in Perim. Two tribes, the Overworld and the Underworld, have been at war over a great power called the Cothica. Despite their names, there is no definite Good and evil tribe, as both have different stories and interpretations of how the war began, with each tribe seeing the other as being evil. The Danians and Mipedians have since joined the war, turning it into a four-way conflict over the Cothica. It is said that the Mipedians were once united with the Overworlders and the Danians united with the Underworlders. It is still unknown why they separated.

The green and red guys would be Maxxor and Chaor, leaders of the Overworld and Underworld, and favorite cards of Tom and Kaz. 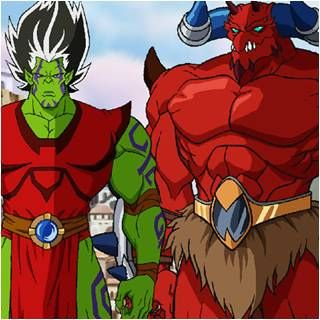 It initially aired on the Cartoon Network from October 7, 2006 to March 13, 2010, but it would not surprise me if it's in syndication. :) It's also a very common story-ID question here, so you're in good company.

8
Does anyone remember this old "trapped in a video game" anime?
5
Show that I watched on Cartoon Network, about teenagers who could transform to monsters
14
Book about a kid who gets sucked into his computer game
11
Cartoon Network show. Monster hunting. Dark theme. Monsters looked to be done by CGI
7
Anime/cartoon with kids battling with robots in a game
8
Book about a boy that enters a medieval fantasy PC computer game
6
Kids TV show combining live action and animation, kids fighting monsters after entering a photo booth