This is a long shot as I have very little information to go on.

In December 2002 I borrowed 2 novels (in English) from a friend. The novels were fairly new at the time. Not more than 2-3 years old. She mentioned this was actually a trilogy, but the 3rd novel wasn't released yet. (Or possibly it had just been released but she didn't have it yet.) My friend, a rather militant feminist, made it a point to only buy books by female authors, so I can be certain the writer of these 2 novels was a woman as well. I returned the books to her mid January 2003. I can't recall if I actually got around to reading the second book by that time. A week later my friend died in a car-crash. When I returned the books to her was the last time I saw her alive. That is why I remember the circumstances around this more than the content of these books.

What I remember about the books: Both novels were called "The King's XXXX" with a different word for XXXX on each novel. The first one was a very substantial paperback (at least 500 pages). The second still fairly substantial, but less so. Maybe 350 pages or so.

Setting was an Arthurian style Britain (not sure if it was actually called that). Lots of little kingdoms in a permanent state of war with each other. Raiders (Viking types) harassing the coasts. Religion is Pagan with Christianity on the rise.

Main character is a woman (late teens as story begins) called Sulveg ap Gren or something very close to that. (Possibly Sulveg or Sulian, last name could be ap Gwen, ap Glen. I'm certain the Welsh "ap" was in there.)

The story start with her returning to her coastal village after some errand when she encounters a party of the sea-raiders. Even though she is unarmed she manages to kill/wound several of them, but eventually she is overwhelmed. They rape her and leave her for dead. Afterwards she finds her village destroyed and her people all dead. She leaves and takes service as a warrior in the army of one of the kings. This king, with her help, gradually unites the various warring small kingdoms and brings peace. As a side effect the unified kingdom is also able drive the raiders from the coasts. There are several battles, political infighting, betrayals. All the usual ingredients.

At some point the heroine becomes pregnant and gives birth to a son. (I think the father is the king, but I can't recall if she went to his bed willingly...) The boy is send away to be brought up in the Christian tradition (King is Christian), but the heroine remains Pagan. Much later her son becomes King.

This may be The King's Peace by Jo Walton. 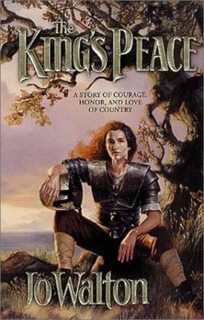 The King's Peace is a fantasy novel by Welsh-Canadian writer Jo Walton, published by Tor Books in October 2000. The first of Walton's published novels, it is also the first of three "Sulien" novels. It was followed in 2001 by a sequel, The King's Name, and in 2002 by a prequel, The Prize in the Game. The novels are a reinterpretation of the story of King Arthur.

Sulien ap Gwien, a woman warrior and daughter of the King of a small part of the island of Tir Tanagiri, is brutally raped by six invading Jarnsmen and her brother is murdered. While travelling to the capital to request help from Urdo, the High King, she happens upon a battle between some more Jarnsmen and some of the King's soldiers. Sulien proves her skill in battle and, drawn in part by the young King's leadership and charisma, she enlists in the cavalry. The novel follows her journey up the ranks, the battles against the invading Jarnsmen and Isarnagans, and Urdo's efforts to unite the many kingdoms of Tir Tanagiri and restore peace and law to the land.

Fortunately, it was an early search result for fantasy series "the king's"

Not the answer you're looking for? Browse other questions tagged story-identification books medieval or ask your own question.

7
Trilogy about a girl, dragons and Nicholas Flamel
8
What is the tilte of Fantasy Genre Novel with 2 brothers (the sons of satan), female author?
2
Paperback, probably young teen, published in the 1990s, about a group of teens trapped in a house with a vampire
6
I am looking for a fantasy novel about a girl with red hair and red palms
11
Fantasy novel where insane character treats dead friend as if he were alive
9
Trying to find a book series from late 90's to early 2000's or just early 2000's
4
YA book series about a teenage dragon