Kids' book where poor boy finds magic stone in field and swallows it, becoming a dragon

Can anyone help me identify this book I read at school during the early 2000s?

The children’s book was about a poor boy who goes to cut grass in a field every day. A certain area of the field grows grass quicker than the other areas, and when the boy goes to that area he finds a magic stone and takes it home with him. The stone increases whatever object it’s put in. The boy puts the stone in a nearly empty jar of rice, the next day the jar is full of rice. At the end of the book, the boy gets greedy and accidentally swallows the stone and becomes a dragon. 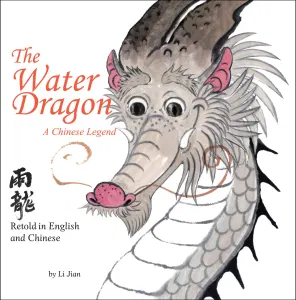 Long ago, in a remote village in China, there lived a kind and generous little boy. He spent his days in the forest, collecting wood to trade for food. One day, the boy made a wondrous discovery: a magic stone that caused his money jar and rice crocks to overflow, both of which he shared with the poor villagers.But strange things began to happen. It no longer rained. The crops died. The rivers dried up. A terrible drought had struck and would not release its grip. The brave young boy, full of dreams of a white, water-spewing Dragon, took his magic stone on a journey—and discovered how to save his village.

Found by searching for children's book "swallows the stone" dragon, which led to this review, which mentions swallowing the stone.

The story of the Water Dragon begins with a young boy, named Ah Bao, who finds a mysterious red stone. He discovers the stone is magical and uses it to help his neighbors in his small village. But no rain falls in the village, everything is slowly drying up, and the red stone’s magic cannot help. Urged by a dream, Ah Bao sets out on a journey to find the water dragon. He makes friends along the way who warn him of a terrible greedy red monster. Ah Bao eventually encounters the monster, who tries to take the red stone. In desperation, Ah Bao swallows the stone and jumps into sea. There he turns into the water dragon, and is able to save his village.

Life is hard for Xiao Sheng and his mother, until one day he finds a magic pearl that brings them good luck and forever changes Xiao Sheng's destiny.

5
Fantasy Book: Young boy finds magic circles in cave
7
Book series - Boy finds gem and is transported to a fantasy world
6
SciFi book where a poor boy uses his brain to power a spaceship
4
Kids/YA chapter book with invisible spaceship and force field, 1988 or earlier
2
Fantasy story about a boy who finds a dragon egg
3
Name of a fantasy book where male character finds a magic absorbing artifact
5
Young male lead who lives in a VR video game