Comic book in which Darth Vader lifts an AT-AT's leg

I remember reading a comic book in which one of the panels featured Darth Vader lifting an AT-AT's leg. I remember it was like he was standing below its leg and had his hand pointed towards the leg, lifting it or stopping it from crushing him.

Star Wars 2 is the second issue of the Marvel comic book series Star Wars and the second of six issues in the series' first story arc, Skywalker Strikes. The comic continues the events of Star Wars (2015) 1 and takes place between the events of Star Wars: Episode IV A New Hope and Star Wars: Episode V The Empire Strikes Back. The issue, written by Jason Aaron with art by John Cassaday, was released on February 4, 2015.

As Luke speeds away, Vader becomes noticeably impressed at Luke's flying skills to which he further ponders who the boy is and Obi-Wan's interest for him. However he is not given long to ponder as Han has finally turned his attention to doing his best to use the AT-AT to step on Vader.

As Han raises the AT-AT's front right leg to step on Vader, he is suddenly bewildered when the leg refuses to go back down to earth to crush Vader. Leia notes that Vader is using the Force to hold the leg in the air. Han does his best to reason that what Vader is doing is not possible. However Vader's Force powers are undeniable. 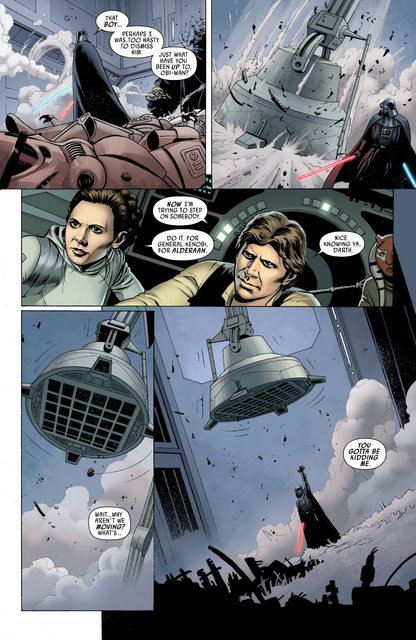 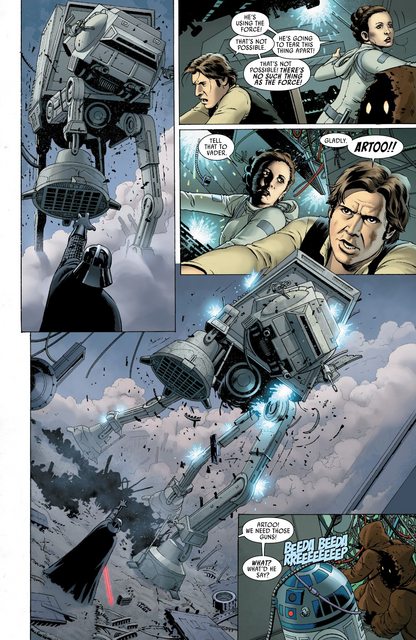 Not the answer you're looking for? Browse other questions tagged story-identification star-wars comics darth-vader or ask your own question.

151
Was Darth Vader REALLY a Sith?
1
Did Darth Vader post-ROTS ever engage in sexual activity in canon?
5
Which book had Darth Vader having a chance to get a new suit?
6
Comic book story- nuclear war between 2 planets
4
Comic book short story about man trying to escape Hades
7
Looking for a Star Wars comic where a Jedi in hiding encounters Vader who coerces him to join the Dark Side by threatening civilians
12
1980's DC Comic featuring Justice Society Anthology?