In A Game of Thrones, how does Arya get through the Mud Gate?

I'm reading A Game of Thrones for the first time and absolutely loving it, but I've gotten to a description that doesn't seem to make sense to me. Can anyone explain it?

According to the book, people were only allowed to enter via the Mud Gate...

Every day since her escape from the Red Keep, Arya had visited each of the seven city gates in turn. The Dragon Gate, the Lion Gate, and the Old Gate were closed and barred. The Mud Gate and the Gate of the Gods were open, but only to those who wanted to enter the city; the guards let no one out. Those who were allowed to leave left by the King’s Gate or the Iron Gate, but Lannister men-at-arms in crimson cloaks and lion-crested helms manned the guard posts there. Spying down from the roof of an inn by the King’s Gate, Arya saw them searching wagons and carriages, forcing riders to open their saddlebags, and questioning everyone who tried to pass on foot.

But just a page or two later, she's walking along the River, watching people in the Fishmarket...

The wharfs were oddly quiet when Arya got there. She spied another pair of Gold Cloaks, walking side by side through the fish market, but they never so much as looked at her. Half the stalls were empty, and it seemed to her that there were fewer ships at dock than she remembered... Arya watched them for a bit , then began to make her way along the river... When she saw the guardsmen on the third pier...

I just bought the official maps as part of The Lands of Ice and Fire, and I just don't see how this is possible?

Can anyone explain this so it makes sense? 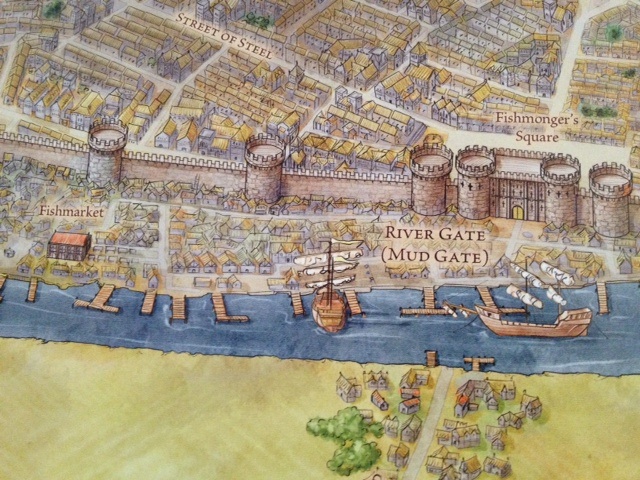 Officially, I don't think it is ever explained in the novels how Arya got through that gate.

Unofficially, the answer to this (IMO) is that Martin made a mistake. The most likely explanation is that his description of traffic through the River Gate is just wrong, because as written it makes no sense.

The "most official" map for King's Landing is the one printed in A Clash of Kings, which you can see here. The River Gate is in the bottom center. The area with the fish markets is very small, and needs to include space for the fish markets themselves, other related shops, probably some inns, warehouse storage for the docks, etc. It's very unlikely that there is much housing outside of the city gates.

But if that's the case, how are the people that work and shop at the fish markets getting there? Arya says there are "fewer" ships and stalls on the wharf, not that there are "no" ships or stalls, so there must still be commerce going on. (As stupid as Joffrey is, I can't imagine he would completely shut down commerce in his own capital.)

Given the geography of the city, and the fact that guards were patrolling the docks and monitoring those entering or leaving by boat, it seems unlikely that they would cut off all traffic through the River Gate.

IMO, it would make more sense to close the King's Gate, which appears to lead to the tournament grounds but nowhere else particularly useful, and allow two-way traffic via the River Gate, especially since the King's Road is on the other side of the river from the River Gate.

It appears as if George R. R. Martin changed his mind for the location of the Mud Gate after writing A Game of Thrones. This is backed up as the paragraph before the second quote in the OP says that the riverfront is on the way to the Mud Gate not after it.

A gull wheeled overhead as she made her way down the hill toward Flea Bottom. Arya glanced at it thoughtfully, but it was well beyond the reach of her stick. It made her think of the sea. Maybe that was the way out. Old Nan used to tell stories of boys who stowed away on trading galleys and sailed off into all kinds of adventures. Maybe Arya could do that too. She decided to visit the riverfront. It was on the way to the Mud Gate anyway, and she hadn't checked that one today.
The wharfs were oddly quiet when Arya got there. ...
A Game of Thrones, Arya V

I have also tweeted Elio and Linda, the co-authors of The World of Ice and Fire, and they have replied with essentially the same reasoning as me above. (I assume they got their information from the same text as I have and not from anything extra that they have access to).

@CarrotLethal: Hello! In AGoT how does Arya get through the Mud Gate? It was only open to those entering the city but Arya manages to get through it to the wharfs and fish market. Any ideas? Thanks! 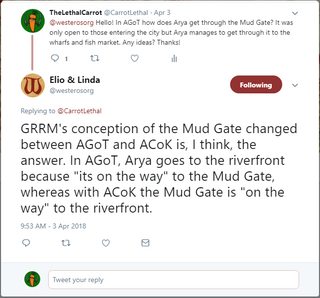 Elio and Linda's extended point is made clear in A Clash of Kings when the text describes the riverfront as being on the outside of the Mud Gate.

Beyond the castle, King's Landing rose on its hills behind the encircling walls. The riverfront was a blackened desolation; the Lannisters had burned everything and pulled back within the Mud Gate. The charred spars of sunken hulks sat in the shallows, forbidding access to the long stone quays. We shall have no landing there. He could see the tops of three huge trebuchets behind the Mud Gate. High on Visenya's Hill, sunlight blazed off the seven crystal towers of the Great Sept of Baelor.
A Clash of Kings, Davos III 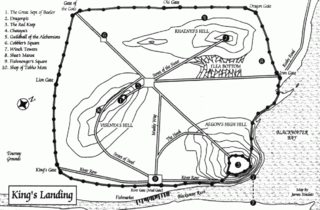 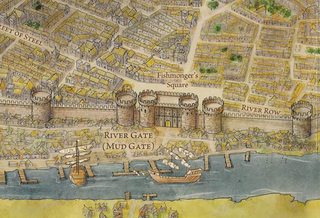 The Lands of Ice and Fire, King's Landing map (cropped)

The most likely "out of universe" explanation is a mistake on Martin's part, and that traffic in and out of the Mud Gate is indeed possible.

I'll try for an in-universe explanation, because there is another option: that Arya is the one who is wrong or "made a mistake". That's the beauty of the "unpredictable narrator" POV style that Martin uses.

While Arya is a resourceful and observant child, it's entirely possible that she simply visited the Mud Gate at the wrong times. She does mention going to all seven gates every day, and might conceivably follow more or less the same route every day. At this point in the story she's still a scared, starving child who has led a relatively sheltered life up until very recently, where she suffered severe emotional trauma (specifics excluded for spoilery reasons).

The Mud Gate, leading to the docks and consequently being where fish and other trade goods are most likely brought in, it might open for outward travel in the morning and/or evening, with a consequently stronger guard presence at those times. It could easily be closed during the day. If Arya later learns that, but the discovery doesn't allow her to leave the city anyway, it's passed over as an unimportant detail and simply picks up with her outside the gate.

Furthermore, Arya already knows how to get out of the city - the tunnel under the Red Keep that eventually comes out somewhere along the Blackwater. She discovered it when she was chasing the old black tom, and she even returned there to hide when the Lannister guards came for her. I hope either the text or the map is revised to correct these oversights.