Aside from the "Vulcan Salute", have Nimoy & Shatner's Jewish heritage had any significant influence on Star Trek?

I have heard many times that the Vulcan "Live-long-and-prosper" hand gesture was created by Leonard Nimoy based upon the hebrew letter "shin", as used in Jewish ceremonies.

Did this shared background of the two most prominent actors on the show (sorry, George Takei!) have any other influences on the show, aside from the salute (limited to the original television series)?

Aside from the shin gesture, nothing distinct, although Nimoy claims judaism shaped his influences on his character. The show's creator made it clear that he wanted the show to be non-religious.

Although Roddenberry was raised as a Southern Baptist, he instead considered himself a humanist and agnostic. He saw religion as the cause of many wars and human suffering. Brannon Braga has said that Roddenberry made it known to the writers of Star Trek and Star Trek: The Next Generation that religion and mystical thinking were not to be included, and that in Roddenberry's vision of Earth's future, everyone was an atheist and better for it. However, Roddenberry was clearly not punctilious in this regard, and some religious references exist in various episodes of both series under his watch.

He didn't keep the show completely clear of it, though. For example, from "Who Mourns For Adonais?"

And, as another example, the chapel [a curious permanent area on the ship for non-religious crew] from "Balance of Terror": 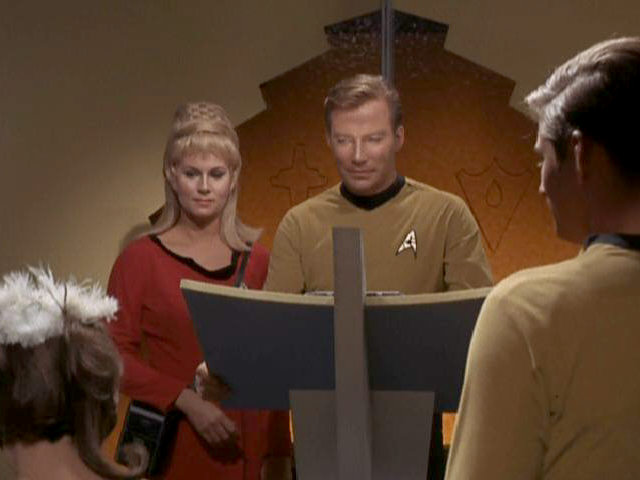 My first post, love the site, and check it out all the time.

Being that I am Jewish, a levite, speak hebrew, went to Rabbinical seminary for two years in Jerusalem, and have seen every episode of Star Trek TOS, TNG, Voyager, Deep Space Nine, and Enterprise all in order, as well as all of the movies, I may be uniquely qualified amongst members of the site to answer the question.

Shalom Aleychem in hebrew means peace be with you. There is a three line benediction that goes with the above symbol during the priestly benediction during services. The third line ends in "...and give you peace." The response to the vulcan saying "live long and prosper" is "peace and long life." Nimoy doesn't state exactly where the saying comes from but I'm sure it comes from the third line of the priestly benediction not from Shalom Aleychem as many point out since it goes with the hand symbol.(citation link removed)

From Nimoy's own mouth, "As a Jew from Catholic Boston, I understood what it was like to feel alienated, apart from the mainstream" So the isolation that he felt as Jew in a gentile world in which Jews have values and a culture alien to the rest of society, aided him in the same isolation a loan Vulcan would have among humans. He also said, "There were a number of values in 'Star Trek' that I felt very comfortable with as a Jew," he added. "The futuristic society is a meritocracy that values education, social justice and tikkun olam, repairing the world. That's exactly what we were out there doing on the Starship Enterprise: trying to heal the universe." Tikun Olam which is essentially doing things to help society in general which was a uniquely Jewish concept he learned growing up as a Jew. http://www.jewishjournal.com/arts/article/bimah_me_up_scotty_20031205/

As for the comments about whether Shatner is really a Jew?!? That's kind of insulting. He is 100% Jewish. He even states it clearly in 2014, “Being Jewish is a part of what I am. What I am is what I bring to the world as an artist." So Shatner plainly states that his Judaism influences his characters including Kirk. http://www.jns.org/latest-articles/2014/4/23/from-star-trek-to-one-man-show-william-shatner-stays-in-the-limelight#.VLd14ivF9qU=

"Mankind has no need for gods. We find the one quite adequate." – James T. Kirk, 2267 ("Who Mourns for Adonais?") The idea of one god is inherently Jewish and was introduced to the world by Jews. See book of Genesis Abraham, Deuteronomy 6:4 "Hear o Israel the lord our god the lord is one.", first of ten commandments Exodus 20:2 "I am the lord your god." All singular. There are many more references in the Torah, I just named a few.

There are so many Jewish themes such as the holocaust less than twenty five years after it ended, being the children of Jewish immigrants from those countries, and having to dress up in nazi garb. In terms of social action episodes and a Jewish perspective on how to handle things clearly Kirk and Spock's characters elucidate this as I referenced above in their own words.

Also I forgot to add that the Vulcan high priestess garb was similar to the Jewish High priest's garb. And Spock's white gown after he was reintegrated in the third movie was similar to a "kitel" which is a white gown Jewish men wear on the high holidays. Again I'd put citations to show photos but I can only put two links as my rating is too low as a first time poster.

Below not exactly answering the question but additional tidbits:

As for other references to Judaism there are many. Clearly the episode "journey to babel" is a reference to the tower of babel which is straight out of the Torah in Genesis.

The actors who play Worf's parents are very famous Jewish/Yiddish theatre actors "Theodore Bikel and Georgia Brown" Bikel played in "Fiddler on the roof" the main character Tevye (had to remove citation link). With a last name of Rozhenko, the yiddish accents, choice of actors, Rozhenko is from Belarus a Jewish area, Mr. Rozhenko is a doctor, and the manner of their characters in the episode, clearly Worf was raised by Jews.

In addition to Nimoy and Shatner being Jewish, Walter Koenig(Chekov) is Jewish as well as Mark Lenard(Sarek Spock's father). (had to remove citation link)

In Judaism you are Jewish if your mother is Jewish, plain and simple. You cannot convert away from Judaism. The reference above to charem has nothing to do with being Jewish it only has to do with your status in the Jewish community. It's the same as being cut off, censured, or shunned(much like excommunicated in catholicism). You're still a full Jew with all of the obligations of a Jew. (had to remove citation link)

There's way more mentions of Jews and Jewish influence then mentioned in this article but it's an interesting read. (had to remove citation link)

There's more. I'll edit this answer from time to time to add more to it.

End of my first post. I had citations for everything but as a first post it only allowed me two links.

Based on my brief research (assorted Googling, checking Wiki/MemoryAlpha), this seems to have been the only identifiable influence from either those 2 actors, or from 2 Jewish co-writers of TOS.

You can possibly count somewhat-maybe-possibly remotely-Holocaust-related themes of 2 episodes ("The City on the Edge of Forever" where they travel to start of WWII, and "The Conscience of the King" that is thematically similar to hunt for Nazi war criminals), discussed here. Frankly, not much of a connection, never mind unproven influence.

Going from memory now, so this may not be correct.

I remember a television interview that Leonard did where he mentioned that, as a child one day in temple he watched the rabbi make the "live long and prosper" sign with his hand. The sign was meant to represent the Hebrew "aleph" . Sorry, I'm not Jewish so I can't explain the meaning of the sign.

So the whole Vulcan "live long and prosper" sign has Jewish roots.

Sorry, no cite. Maybe someone else can come up with it.

25
Did any Star Trek actors have issues with the anti-religious nature of the series?
22
What are the symbols in the Enterprise's chapel?
-3
Is there any info on the plot for the upcoming 2016 film "Star Trek Beyond" besides what's in the wikia article?

35
Aside from Stephen Hawking, were there any other "as himself" Star Trek cameos?
18
Why was Nimoy in the 2009 Star Trek movie and Shatner not?
5
Aside from the Bridge set pieces, which Star Trek TOS structural interior set piece garnered the most onscreen time?
5
Were there any named, blue beverages in the original Star Trek series?
32
Does James Kirk have any named superiors in Star Trek: The Original Series?
9
Star Trek TOS, in S3E19, is Leonard Nimoy actually playing the piano?
17
Was William Shatner really a jerk in the 60s, 70s, and 80s?
5
Were any of the stories used in "Star Trek: The Animated Series" rejected from the TV show?
42
Did Lucille Ball have a creative influence on Star Trek?
4
Are there any Vulcan Battlecruisers shown in canonical Star Trek?