Can Weeping Angels See In the Dark?

In the Doctor Who episode Blink the Doctor sets up a trap for the four Weeping Angels seen in the episode by tricking all four to converge on the Tardis as it dematerializes, so once it's gone, they are all looking at each other.

This is in the basement of an abandon house. While there is some light coming in, there could be times, such as moonless and cloudy nights, where there will be almost no light available and it's possible if the house were boarded up even more securely, that the basement could be in total blackness.

Would the Weeping Angels still be trapped because they're looking at each other, or once they're in pitch black, would they no longer see each other and - in their awareness - have time to cover their eyes and avoid looking into each other?

I don't know that there is a canon answer to this question.

However, Weeping Angels are predators who hunt only when they cannot be seen by their prey. Since one of the times when they cannot be seen is in pitch dark, it seems likely that whatever sense the Angels are using is not impaired by darkness. If it is not impaired by darkness then the four angels around the Tardis would remain locked until something interposed, blocking their line of site to each other.

In Doctor Who "The Time of Angels" 11 shoots out a light thing in the sky and a bunch of Weeping Angels pretty much live in caves which presumably would make them able to see in the dark. 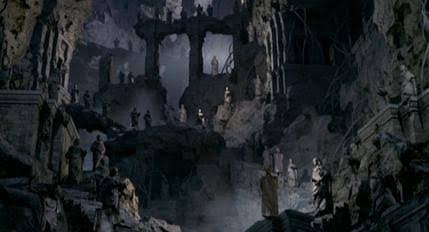 On the siteOn the site
1111 bronze badge
Add a comment  |