There's this sci-fi book that I read more 10 years ago. Probably from the 80's or 90's. The author was female, I think. It was about Earth being invaded by these purple (possibly blue) aliens. The main character is a lady who, along with other females, was captured and 'harassed' by these aliens who seem kinda good-looking except they are taller than your average 6-foot Joe. She falls in love with one and the alien helps her and other people who've risen up to fight against the marauding alien conqueror. Can anybody help, please? 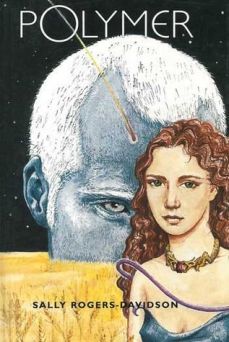 Is it "Polymer" by Sally Rogers-Davidson?

It’s the story of Polymer – a nickname – who grew up on an affluent space station where everyone had everything they needed and old people could be kept technically alive thanks to modern medicine, long past their natural deaths.

Her life of friends and parties is destroyed when the space station is invaded by the Gloman Empire.

Separated from her family and everyone she knows, she tries to resist the invaders and instead manages to catch the eye of one Captain Nemo (yes, his name makes her want to giggle at first). Events lead to events which lead to events, and it’s quite the story.

Despite the odds, and the fact that Nemo makes her his "personal" prisoner, the two do fall in love. Read more reviews here and here, and go through a book preview here.

This could be Anne McCaffrey's Catteni Series except the aliens were grey rather than a shade of blue/purple.

Kristen is kidnapped from Earth as part of a full on invasion and ends up in a relationship with Zainal a renegade Catteni. The nature of this relationship depends on which version of the story you read. In the original short story it's not initially consensual, in the books it's more complex. (A common theme in McCaffrey's works)

A group of rebel humans including Kristen and Zainal is dropped on a new planet as unwilling colonists and runs a rebellion from there.

"The Thorns of Barevi" was an attempt to cash in on the lucrative market for soft- and hard-core pornography in the 60's. The market paid well for such stories and many science fiction writers earned their monthly rent from such submissions. I thought I'd give it a try. I didn't really succeed there. But there were seeds in the short story that could eventually germinate a full novel about the modus operandi of the Catteni in subjugating a planet and its inhabitants. But I haven't written that one yet, either. - McCaffrey - Get off the Unicorn - 1977

It should be noted that this story line is so stereotypical that the Catteni series has its own TV Tropes page. As you can see from the short story description, it was never intended to be a particularly original concept.