In the comics as well as the movie, we see that Dr. Manhattan gets so upset about having given his ex-girlfriend Janey Slater cancer that he decides to remove himself from the equation and abandon the Earth.

Since he seems to have almost omnipotent control over matter (he can recompose himself after being disintegrated and he says at the end of the movie that he might even create life in the future), why didn't he simply cure Janey's cancer?

It's obvious that he was losing his humanity, but surely he could easily have fixed the problem just before he left the Earth.

There's no reason Dr. Manhattan could not have cured Janey's cancer. For all intents and purposes, he has the powers of Molecule Man, a villain so powerful that only his psychiatrist can beat him.

In a way, Dr. Manhattan is not a character in Watchmen at all. Until the point at which his observation powers no longer work (which, in the comic, was due to tachyons that he postulated (or saw himself postulating) could have been caused by nukes detonating) he is completely unable to take any action excepting those he has already taken. He is, in essence, an actor in the play of his life. He has a script and it cannot be deviated from.

It's almost like he's in a quantum state - he both can and cannot cure cancer. The only problem is that with Dr. Manhattan, all quantum states have been viewed. They have been collapsed, and there is only one possibility. Schrodinger's cat is not both alive and dead, he was alive or dead before he was even put into the box, but no one knew except Dr. Manhattan.

Once he regains his free will (due to being incapable of perceiving his future state) Dr. Manhattan can act again. But at that point, he doesn't cure cancer. Instead, he decides to become God.

I don't believe that Dr. Manhattan ever does anything productive with biological systems. Within the movie, you see him blowing up people, but in both the movie and the comics, the only things that he builds or fixes are inorganic objects.

It's part of a greater symbolism where, for all of his great powers, he can't do anything to bring about life, merely sterile inorganics.

It very much depends on your choice of canon. In the film and comic, his powers are certainly up to the task of interacting with humans on a cellular (or even atomic) level but the reality is that removing the cancer in that way would be prohibitively time-consuming.

I have witnessed events so tiny and so fast...they can hardly be said to have occurred at all...

[later]...like oxygen turning into gold... I've longed to witness such an event

In an earlier draft of the screenplay, Laurie was the one with cancer. Dr Manhattan does indeed cure it. I've edited for brevity;

LAURIE : Then do me a favor. If the world's going to end, it shouldn't matter a bit. I want you to cure me [of cancer]

LAURIE : You have the power to do it. I want you to do it. Please.

Eyes wild, she GRABS his great blue HAND -- and THRUSTS IT into her chest, where it DISAPPEARS UP TO THE WRIST.

A BRILLIANT BLUE AURA engulfs them both. It SPREADS and GROWS IN INTENSITY, suffusing the sky, finally BLOTTING OUT the vast Martian landscape altogether.

Almost certainly, but possibly not permanently and he has no motivation to do so

It's difficult to say that Dr. Manhattan can't do something, considering he has seemingly total control over matter down to the molecular level. Janey had lung cancer from radiation exposure. Removing Janey's tumors would be a matter of detecting those cells and removing them. For Jon, he could probably do this while brushing his teeth.

However that does not mean Janey is "cured". Whatever the radiation did to start the body producing tumors could still be at work, it could already be migrating to other parts of her body - and if it is in her blood or lymph, then it is quite possible for the cancer to return, maybe not even as lung cancer. Given Jon's understanding of the world, he may realize this as well. Arguing that Jon could effect someone biologically is easy, it is a bit harder to make a case that he would go around messing with genetics.

And Janey isn't doing herself any favors either: 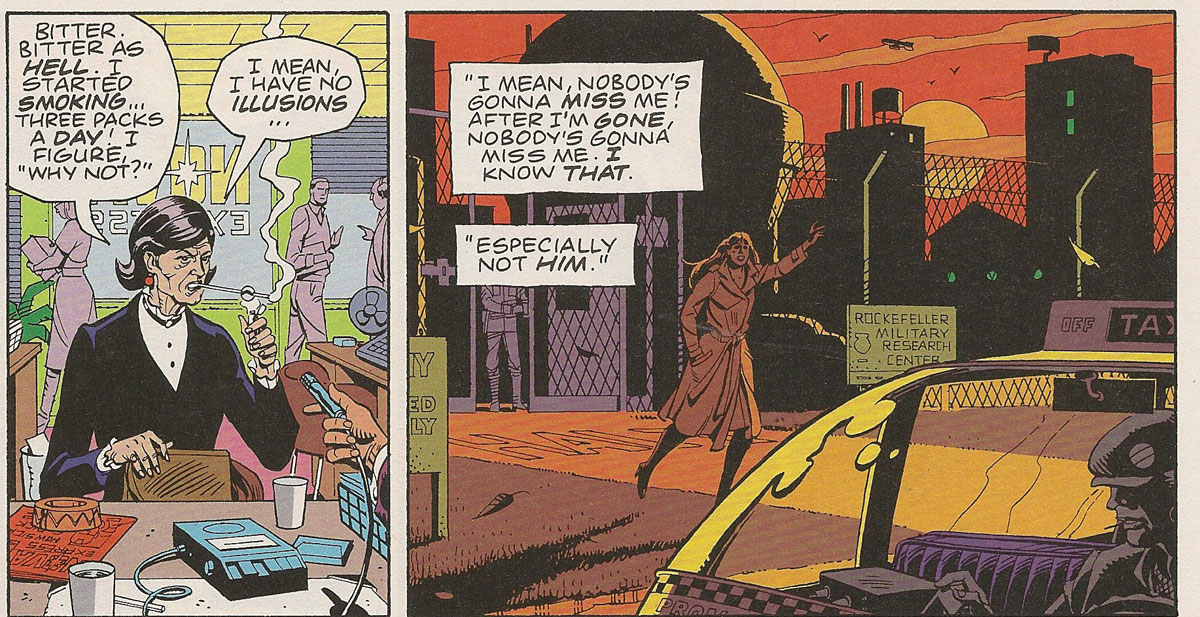 But more to the point - Dr. Manhattan may not be able to cure her purely from a psychological point of view. Jon has now taken an extremely deterministic view of the world and does not feel like it his job to stop death and disease. Right before the Janey interview scene Laurie notes:

"I remember soon after he failed to prevent JFK's assassination we argued. I said, 'Jon, you know how every damn thing in this world fits together except people!'"

It’s not about what he can or cannot do, but what he wants to do. He could just cure Jenny's cancer but the thing is by doing so he would have altered the fact that she have already had cancer. Same goes by for rorschach, he could erase his memory but by doing so he's altering the fact that he already gained that information in the first place. I think he doesn't want to ruin space and time continuum too bad and doing things as humanly as possible such as killing a guy and not "washing his brain" or "curing cancer".

dcocodcoco
1
Add a comment  |
Highly active question. Earn 10 reputation (not counting the association bonus) in order to answer this question. The reputation requirement helps protect this question from spam and non-answer activity.