Are there any published details of Kenobi's communication with Lars family on Tatooine before ANH?

From the movies we know that Obi-Wan Kenobi delivered Luke Skywalker to Owen and Beru Lars to raise on Tatooine shortly after Luke was born at the end of RotS (Episode 3).

The next think we know is Luke running into Ben Kenobi during A New Hope.

There seems to be a hint that there was at least SOME communication between Kenobi and Lars family based on him telling Luke:

Your father wanted you to have this when you were old enough, but your uncle wouldn't allow it.

I was wondering if any details of what transpired between Kenobi and Larses in the years between RotS and ANH were noted in any canonical works (of any canon, including EU books/games/comics/etc...)?

Yes, in the junior novelisation of A New Hope, there's mention of an incident when Obi Wan saved Luke from dying in the desert. Evidently Owen was none too pleased and told him to go away:

Luke hadn’t seen Ben in five seasons, since the time Luke and his friend Windy had ridden a dewback into the Jundland Wastes, a rocky region that consisted of a mesa and a canyon. The dewback had thrown them into a canyon and ran off. By nightfall, the boys were bruised and tired and lost. Then they’d heard a voice calling Luke’s name. Incredibly, it had been Ben. He’d somehow found them, then guided them back to the Lars homestead. I still don’t know how he knew we were lost, or how he knew my name. But if Ben hadn’t helped us …

Luke knew his uncle didn’t like Ben, but had no idea why. The night that Ben had found Luke and Windy in the Jundland Wastes and brought them back to the moisture farm, Owen had become furious. Not at Luke, but at Ben. Owen had told Ben to get off the farm and never come back. I thought Uncle Owen would’ve been grateful to Ben for rescuing me. What does my uncle have against him? 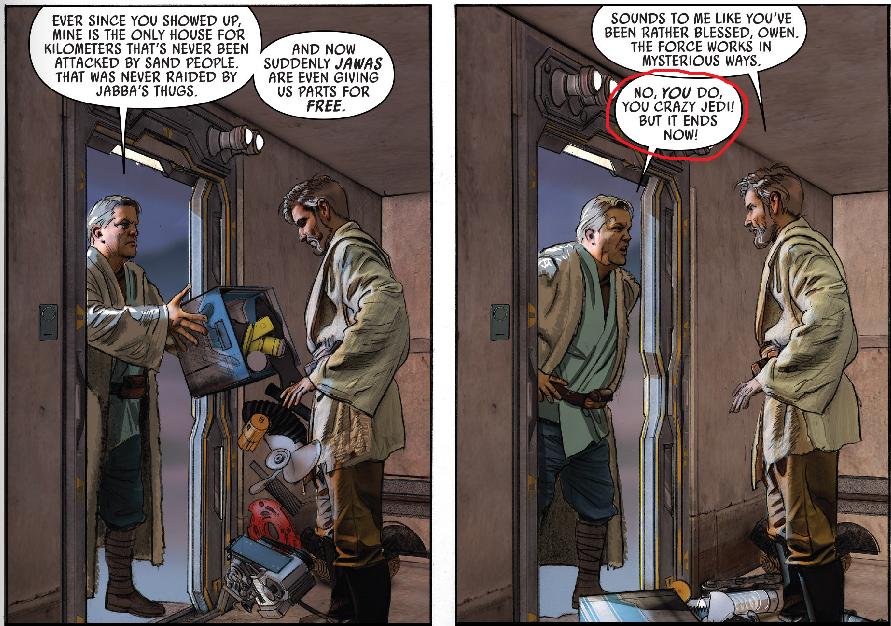 Star Wars #015 - From the Journal of Old Ben Kenobi

This period of Obi-Wan's life is particularly undocumented. As I wrote here, the only reference in Obi-Wan's Wookieepedia article is Adventure in Beggar's Canyon. It's a paperback children's book published in June 1998, almost one year before the release of Star Wars Episode I: The Phantom Menace. Here the interesting part of the summary form Obi-Wan's article.

The reason for Owen's anger was that Kenobi had attempted to give Anakin Skywalker's lightsaber to Luke, feeling that Luke was old enough and should be allowed to have it. Owen refused to allow it because he believed the Jedi path was a destructive one. He told Kenobi that he didn't want Luke to make the same mistakes Anakin Skywalker did, saying that he felt Anakin should have never left his mother and gotten involved with the "damn foolish idealistic Jedi crusaders" in the first place. He vehemently told Kenobi to leave and to stay away.

In the quoted Wookieepedia article on Obi-wan it also lists a time previous to that quoted by DavRob60, where Kenobi would often visit the moisture farm in secret and once helped to recover 20 vaporators stolen by Tusken raiders. He returned them to Owen Lars who was none too pleased about Kenobi's involvement. Apparently, according to this entry on Beru Lars, at some point they were aware that Kenobi was checking up on Luke. On another note vis-a-vis Kenobi's involvement with the Lars', he protected them in this incident.

2
what contact, if any, did Owen and Beru Lars have with Obi-Wan?
63
Why Was Obi Wan So Eager to Train Luke as a Jedi?

30
Why would the Larses need a translator droid that spoke Bocce?
22
Who gave the order to kill Owen and Beru Lars?
39
Why did Luke leave Owen and Beru's remains?
15
Did Luke ever try podracing?
9
Had Luke Skywalker been adopted by Owen and Beru?
37
Did Aunt Beru and Uncle Owen know that Obi-Wan Kenobi was a Jedi?
6
Why didn't Luke know about Anakin Skywalker?