The main character in the novel is called "Long Range" or something similar. It's about biker gangs roaming post-apocalypse USA and the Long Range character can sometimes "see" the future. His future viewing was done in a drug induced trance. It ends with a big battle between rival biker gangs. Also involves some Native American tribes and rituals.

I haven't read it since the early 80s. It was definitely aimed at a mature audience as it had a lot of sex and violence.

The main character in the novel is called "Long Range" or something similar.

Long Range's mind raced; then as he entered the pass, he wheeled his machine about, stopping for a moment to wipe his hand across his dusty face and red-rimmed eyes. He jerked the shotgun from his saddlebag and, holding it in his left hand, nosed his bike back down the narrow trail. As he approached the bend he could hear the sound of motors laboring up the mountain toward him. He cocked the shotgun with his thumb, feeling completely cold but fiercely elated.

In the dark world after the nuclear apocalypse, a nascent civilization turns to the Hell's Angels to save the scientist who can reclaim the Dead Lands...

The Hell's Angels were in conflict with their biker rivals, the Gypsie Jokers. I was going to point out that it was not a bad book, but just that it did not read quite like science fiction. Then about halfway through the book the Hell's Angels protagonists encounter and join up with Lakota Indians who, in this post apocalyptic world have gone back to the "old" ways. Then it starts to read like an historical western. The Hell's Angels even give up their motorcycles for a time to ride horses. At that point, though, the fragmentation of North America starts to hit home. 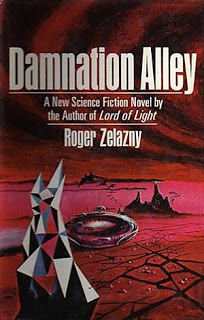 Ex biker gang leader Hell Tanner is offered a full pardon from L.A. officials if he agrees to deliver a vaccine to plague-stricken Boston. Sounds easy enough, but this is a North America post-nuclear war, and the heartland of America is now known as Damnation Alley

It shares some (but not all) similarities:

Not the answer you're looking for? Browse other questions tagged story-identification novel apocalypse or ask your own question.