If the Death Star was able to move, did it ever collide with anything?

Are there any in-canon instances of a Death Star (or other Worldcraft-class vessel) colliding with a large object such as an asteroid at those kinds of speed?

There is a non-canon example in the X-Wing game's companion story book/strategy guide. It included a novella called The Farlander Papers where an Imperial frigate decelerating from hyperspace hits an X-Wing fighter. The X-Wing was obliterated and the frigate was unharmed. It was explained that the frigate's shields protected it from such collisions.

Did it happen? No.

In current (Disney) canon, there are only two moon-sized or larger hyperspace-capable ships: the Death Star (I and II) and Starkiller Base. Neither of them has collided with anything in hyperspace in any of their canon appearances. There may be Legends examples, but I can’t find any.

Is it possible? Yes.

It’s important to distinguish between two related but distinct situations here, either of which could be considered as “colliding at lightspeed.”

It's not canon, but in Star Wars Infinities: A New Hope, The Death Star is piloted into Coruscant. 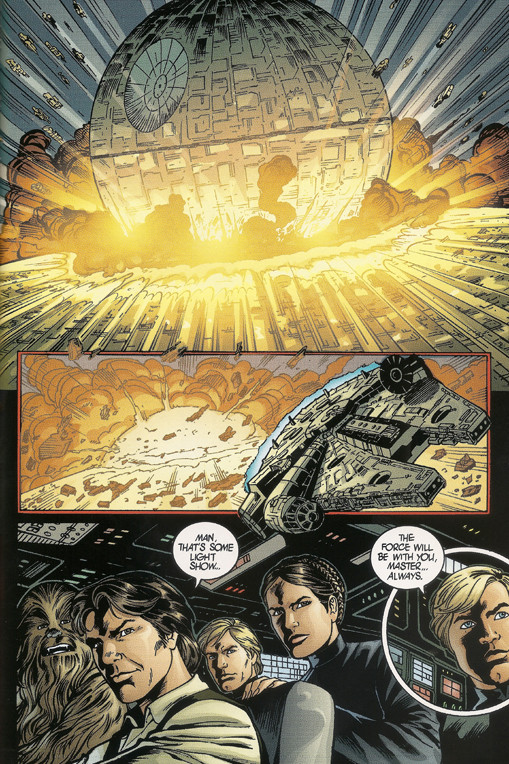 The station is obliterated, dealing massive damage to the planet in the process, though it is unclear if Coruscant is entirely destroyed.

This is the only instance of a Death Star-sized ship crashing into something comparatively large in an officially licensed work that I am aware of.

Same thing that happens when anything gets hit, the large thing takes damage, the small thing gets pulverized. Granted it would be unlikely that the Death Star would be hit with debris that could damage it seriously. At sub-light speeds the Death Star has limited shields and arrays of turbolasers intercept or deflect debris that pose a threat. As for FTL, Star Wars ships use Hyperdrives that take a ship out of normal space and into hyperspace. It is how they avoid dealing with impacts at luminal velocities.

75
How did the Death Star move?