What is the difference between DC Comics' Supergirl and Power Girl?

I don't understand the difference between Supergirl and Powergirl. Are they the same person but one is older? Are they from different universes? Is one a clone of the other? Or are they two completely different people?

Power Girl is a Kryptonian from the Pre-Crisis DC Universe's parallel world of Earth-Two. Earth-Two was where some of the earliest and most popular heroes from the Golden Age of Comics (World War II to the late 50s/early 60's) were assigned.

The Pre-Crisis Multiverse was different from the current Multiverse of the DC Universe in that the Post Infinite Crisis Universe is a planned multiverse rather than an accidental one.

DC had many worlds and there was little some difficulty keeping track of which continuities did what. On Earth Two, for example, Kal-L married Lois Lane, Batman married Selina Kyle, Robin grows up but does not become Nightwing. Since the Golden Age heroes appeared to be aging (still slower than reality but faster than they do in comics) DC rebooted the Silver Age of comics with newer, more powerful versions of their Golden Age counterparts. 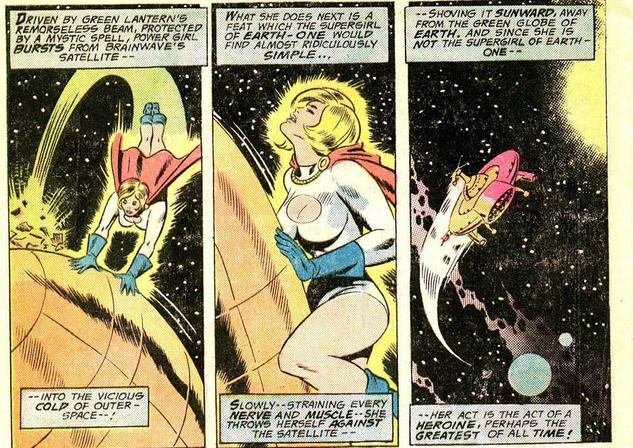 In the DC New Universe:

On the parallel world known as Earth 2, Power Girl is Kara Zor-El, the cousin of Superman. Like him, she came to Earth from the dead planet Krypton. But though they were sent from that planet at the same time, she arrived decades after him. In that time, she'd aged only months, and arrived in perfect health. At this time, Superman kept his cousin Kara hidden, as his secret weapon in their war against Steppenwolf and Apokolips.

She met her best friend, Robin aka Helena Wayne, on the day that Helena's mother died. When Robin rushed into a burning building, furious with grief, Batman called to Superman for help. Superman sent Kara to rescue Robin from the building. (Worlds' Finest #0)

Batman eventually devised a virus to take down Apokolips' forces, but he, Wonder Woman, and Superman were killed in seeing it to fruition. Supergirl was unable to prevent her cousin's death, but after the plan succeeded, both she and Robin plunged into a portal in pursuit of a figure which they presumed was from Apokolips. Whoever it was, the person eluded them and they emerged on a parallel Earth with no way back. (Earth 2 #1)

Not the answer you're looking for? Browse other questions tagged dc supergirl or ask your own question.