I'm trying to find a novel I read as a mass market paperback. There were planets with some sort of valuable resource but the resource was in areas behind "curtains." All the space age technology stopped working behind the curtains and the protagonists and antagonists had to use Elizabethan-era cannons and guns (single-shot?). I seem to recall carts on rails carrying the resources and being pushed through the curtains.

Both sides used "greys" (aliens) as slave labor to do the actual extraction. During the course of the novel, there are several daring privateering-type raids and one of the protagonists begins to have doubts about using greys as slaves. I think one of the characters or their ships was called "Tolliver."

I found it! It's called "Igniting the Reaches", part of the "Reaches" series by David Drake.

In a distant galaxy where immense danger threatens, desperate pirates travel to the outer limits of space, doing trade with the star colonies and encountering rivals, aliens, and strange human hybrids. 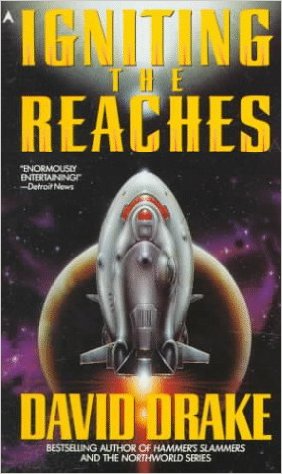 Not the answer you're looking for? Browse other questions tagged story-identification novel spaceship technology or ask your own question.