Two spacecraft pilots travel at light speed, meet back on Earth in different era due to time dilation

I've been looking for the name of a sci-fi romance book about space travel but haven't been successful so far. I came across it a few years ago, read the plot on its back cover but didn't read the book. It is about two spacecraft pilots, a man and a woman, who travelled at light speed (or maybe FTL, I can't remember) in separate ships. Every time they return to Earth, centuries have passed on Earth because of time dilation. They meet each other for a few times on Earth in different eras, but don't know when, if ever, they will meet again. I don't know how it ends.

If anyone knows which book I'm talking about, could you please tell me the name? Thanks a lot!

As Bob Warwick mentions in his comment, this could well be Joe Haldeman’s The Forever War. 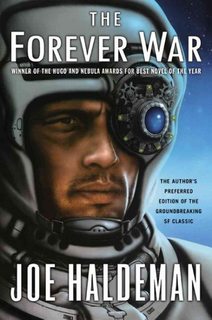 In this, William Mandella and his fellow soldier and lover Marygay Potter (sex between soldiers is compulsory in the novel, rather than something frowned upon) go off to fight in a distant interstellar war. They return across the vast distances of galactic space, and time dilation means that decades have passed on Earth. They go off to fight again, returning after even more time has passed (and many interesting sociological changes have taken place on Earth). Eventually they get separated by the military (they are too valuable as experienced soldiers to be used in the same battles) and lose contact.

William returns to Earth as the war ends…

… he finds Marygay again. She has been travelling around, making use of time dilation to remain young for when he eventually gets home. The novel ends with a report of the birth of their first child.

With the exception of the fact that neither of the characters are pilots (although they occasionally pilot craft), the other details fit well.

Not the answer you're looking for? Browse other questions tagged story-identification books time-travel space or ask your own question.

29
Name of a sci-fi story about time travel
12
What book has Earth's surface covered with a raised platform with a jungle underneath?
13
Book where humans on another planets are cannibals
25
Short story about astronauts landing on a planet of shapeshifters
7
Looking for a book about a guy who travels through portal in the Vietnamese jungle
4
story id - werewolf biochemist vs alien invasion
7
Book about a transport spaceship
11
Book about relativistic ship, ESP for navigation and communication, Earth destroyed