How would Quidditch resolve a tie?

Say that, at any given moment during a Quidditch match, Team A has 150 points and Team B has 0 points. Then, in the next moment, Team B's Seeker has caught the Snitch. Both teams now have 150 points and, with the Snitch caught, the match is over.

Is there an immediate tie between the teams? Perhaps there is, instead, a sudden death face-off of some sort? Or does Team B win by default, and catching the Snitch counts as a tie breaker?

The last option sounds most probable to me, but I'm interested if there are any canon accounts of the above situation and how they were resolved, as I can't rememebr any mention of it in Quidditch Through the Ages or the old Quidditch videogame I used to play.

So I dug out my version of the only video game iteration of Quidditch in an attempt to emulate a tie and see what happens. For those curious, that would be Harry Potter: Quidditch World Cup; specifically, I tested on the GameCube version.

I say tested, but the game was easy enough that it only took one match to get a tie; I simply got my team to a 150 point lead, then played it out until the other team caught the snitch. The result was rather anticlimactic, just ending in a "Draw" with no sudden death or anything.

So obviously this isn't canon, but considering its the only fleshed out emulation of Quidditch it seems relevant to the question. 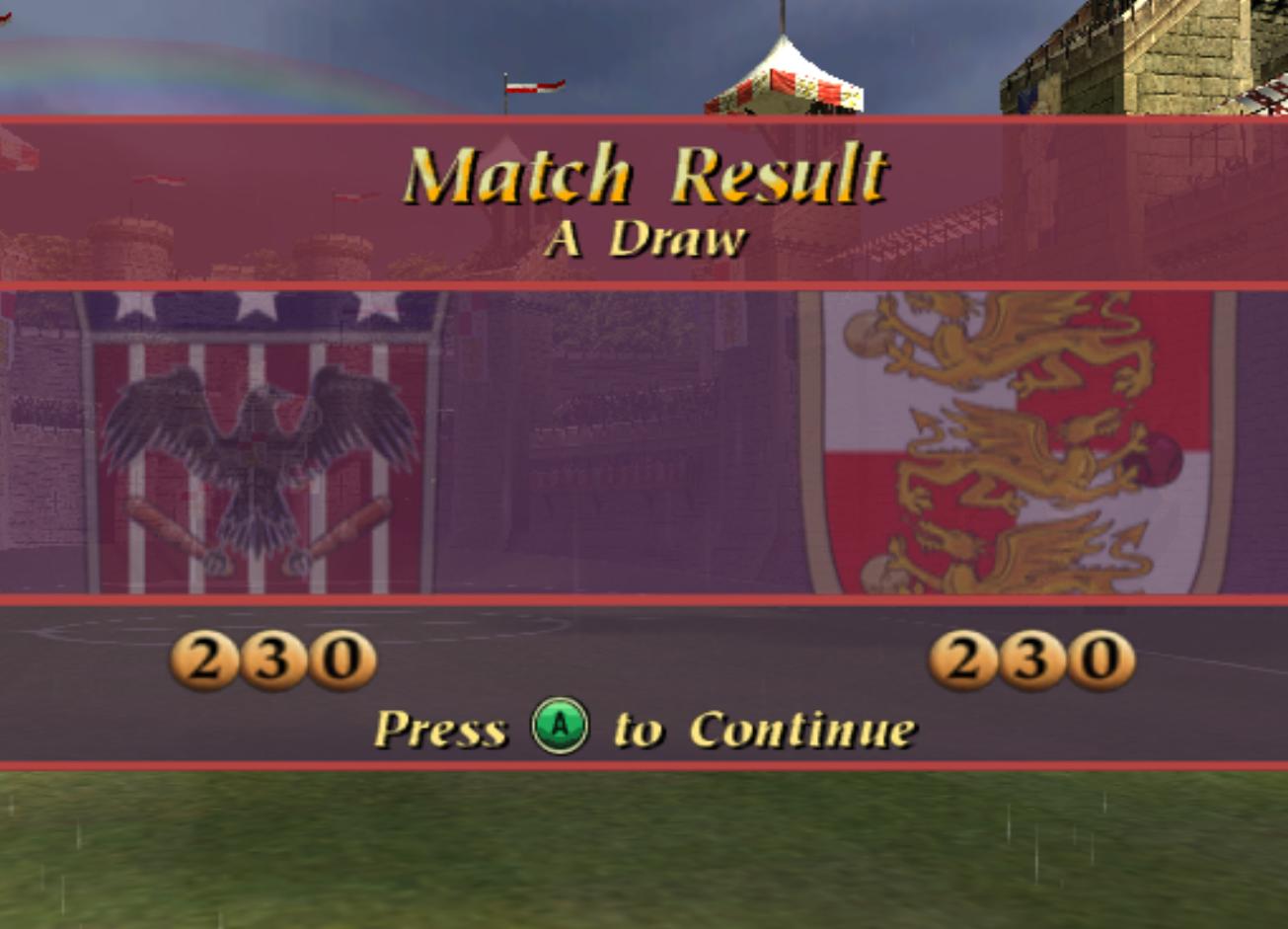 There are no mentions of what would happen in a tie (that I know of).

I don't recall this being discussed in the main books, Quidditch through the Ages, or any JK Rowling interview. There's nothing to suggest the situation is impossible, but it never occurs in the canon and so we don't know what happens.

I can think of a few possible outcomes:

Those are just guesses though; we have nothing to say which (if any) outcome is correct.

In the second issue of the Daily Prophet that JK Rowling wrote back in 1998, there was an article with the title "Cannons Didn't Loose Shock" describing a draw.

While the full text is not available online, a summery can be found on the Harry Potter Lexicon.

The Daily Prophet reported that the Chudley Cannons drew a match against the Caerphilly Catapults. This broke their 16-game losing streak and gave hope to team manager Ragmar Dorkins
The Harry Potter Lexicon

In general Quidditch tournaments consist of many games and the particular outcome of one match do not matter that much, as points are cumulative.

Remember that J K Rowling is British and in British sports a tie is a perfectly acceptable outcome to a sports match.

Certainly in league events such as the house cup, a tie would be fine (e.g. 3 points for a win, 1 point for a tie).

As wizarding events are, at the best, quirky. I'd suggest that, even in the world cup final a tie would acceptable.

43
Why did Victor Krum catch the Snitch in the Quidditch World Cup?

13
In Quidditch could the Seeker play other positions?
33
Could another player catch the Snitch?
63
Is Quidditch an inherently flawed sport?
27
How can a Seeker practice if the Snitch can't be touched prior to a Quidditch match?
8
Do Quidditch rivalries exist in the Wizarding World?
6
What sort of enchantments are placed on Snitches?
43
Why did Victor Krum catch the Snitch in the Quidditch World Cup?
55
Why are there are no standby players in Quidditch?
11
Who won the Quidditch Cup in Harry's first year?
3
If the seeker only touches the snitch, would that count as catching it?