So, I read this book as a child, and have been trying to remember its title for a couple of years, with no success.

The story was about a group of kids who were playing a role-playing game, and eventually the monsters from within the game became real, and they then had to fight them in real life.

The main thing that I remember sticking out to me was that there was this heavy-duty Christian kid who kept telling them that the game was evil. He himself actually started playing partway through. He played a Cleric, and in the first session he played the game, he gave away all his money and just went around healing NPCs. Additionally, I think the main character was female.

I know that's much to go on, but hopefully someone remembers something like this.

This sounds a bit like a slightly twisted version of Mazes and Monsters, a 1981 Problem Novel by Rona Jaffe later made into a 1982 made-for-television movie starring a young Tom Hanks. In that book, four college kids play the eponymous D&D-like game and one of the players, Robbie, starts to confuse the game for reality and begins to become his character, Pardieu, giving away his things and attempting to heal people with spells.

Places where it doesn't quite match up is that the monsters don't actually become real, Robbie is the only one hallucinating them, and Robbie is not Christian (although his character, Pardieu, has heavy overtones of being a celibate cleric). 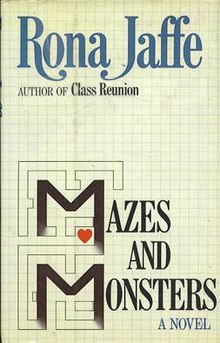 Mercer may seem like your average eighth-grader, but every day during study hall, he rolls the dice and conquers the world in Wizards of the Warrior World, a fantasy role- playing game. In the game, Mercer is Shath’dra, sixth-level Warrior-Mage, fighting to survive and gain wealth and power. Mercer lives for the excitement of the game, until one day when reality becomes even stranger than fantasy. When a group of religious fanatics protest the game for its simulated use of magic, the press picks up on the story, and Mercer finds himself being stalked by four real-life wizards who are desperate for his help. With his life suddenly in danger, role-playing takes on a whole new meaning for Mercer Dickensen.

Another possibility is Bruce Coville's Spirits and Spells (ISFDB), released both as #2 in the Chamber of Horrors series and #15 in Twilight: Where Darkness Begins. This one has a female protagonist, Lydia, and the game does come to life around them, courtesy of playing the game in a house haunted by a murdered servant girl. I haven't found any reference to a religious guy in it yet, but there is mention of the game being called evil:

Lydia was so silent that for a moment Tansy thought they had been cut off. When she finally spoke, her voice was little more than a whisper. “I felt… fingers. Icy fingers, probing at my mind. Tansy, tell Travis to get rid of that game. It's dangerous. No, it's not just dangerous. It's evil.”

Besides, Lydia was just being foolish.

How could a mere game be evil? 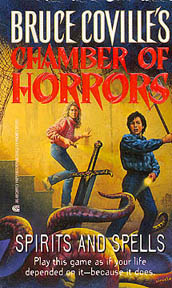 “Magic is loose, and death is in the air.”

Trying out their new haunted house game, Sprits and Spells, in the creaky old Gulbrandsen place seemed like a cool idea to Travis, Tansy and their friends.

That was before they found out what was in the attic… and the basement… and everywhere in between.

Following up after having actually read the book in question, it is not a good match in the end. There is no hyper-religious character and no one picks up a role of going around healing everyone. Instead, the story basically has the players doing LARP-style quests to gain magic items, but it turns out that the "characters" they're playing exist in another, more magical, world, and they're attempting to take over the players via these artifacts, which are real.

I'm keeping the answer up for historical purposes, but it is not a good match for the question past the superficial of the game becoming real.

20
Can you help identify a book about kids getting pulled into a fantasy world?