What is the ancestral form of language used in the fable that David was studying during the flight?

David studies linguistics during the flight to LV-223. We get to listen and read a fable. Is it written in a real language? What is the name of the language? Can the fable be translated? 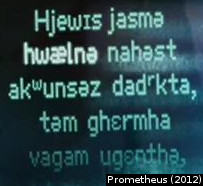 The fable is called Schleicher’s Fable. It's a document dating back to 1868, and does exist outside of the film universe. It was written by one August Schleicher in a modernly constructed approximation to Proto-Indo-European, the real precursor of all Indo-European languages. An English translation runs roughly as follows:

[On a hill,] a sheep that had no wool saw horses, one of them pulling a heavy wagon, one carrying a big load, and one carrying a man quickly. The sheep said to the horses: "My heart pains me, seeing a man driving horses." The horses said: "Listen, sheep, our hearts pain us when we see this: a man, the master, makes the wool of the sheep into a warm garment for himself. And the sheep has no wool." Having heard this, the sheep fled into the plain.

This is of course much longer than what is actually used in the film, which is only the first few words of the fable. According to this article (possible spoilers!):

Prometheus star Michael Fassbender spent 17 hours reciting Schleicher’s Fable, committing it to memory, only to have Ridley Scott use only the first line in the film. Talk about dedication!

Not the answer you're looking for? Browse other questions tagged alien-franchise languages prometheus or ask your own question.

8
Who discovered the Engineer's language (and how it sounded)?

20
What did David say to the Engineer?
12
What did the Engineer say to David?
9
Were any portions of Tolkien's writing truly “translated”?
31
In Iron Man 2, what does Black Widow say to Tony Stark in Latin?
14
What language was the inscription on the Doors of Durin written in?
8
What can we infer about the programming language used in “Jurassic Park” (the book, not the movie)?
16
In what language are the original Jedi texts?