Did the Transporter room have to be part of the trip, or could it beam items from pt A to pt B w/out beaming the targets aboard during the trip?

Say Scotty wanted to beam something from point A on a planet to point C, is it demonstrated somewhere in Star Trek canon that the item from point A must be routed through point B, the Transporter room, or can the item be beamed from A to C and and skip materializing it at point B?

There are several examples as pointed out by @Richard in comment: Site-to-site Transport

The matter stream consisted of the stream of sub-atomic particles that resulted from the dematerialization of a transport subject. The stream was relocated from the original site of the subject, passed through the pattern buffer, transferred as an energy beam, and rematerialized into its original form again at its destination (often a transporter platform)°.
°Source

The pattern buffer was a key component of transporter systems. The buffer was used to temporarily store the matter stream following dematerialization, but prior to sending the stream to its target. This was done because of the relative motion of transporter and target. By temporarily storing the matter stream, the Doppler compensators had enough time to adjust the targeting scanners¹.
¹Source

From the Star Trek Encyclopedia:

See the section on Direct Beaming. 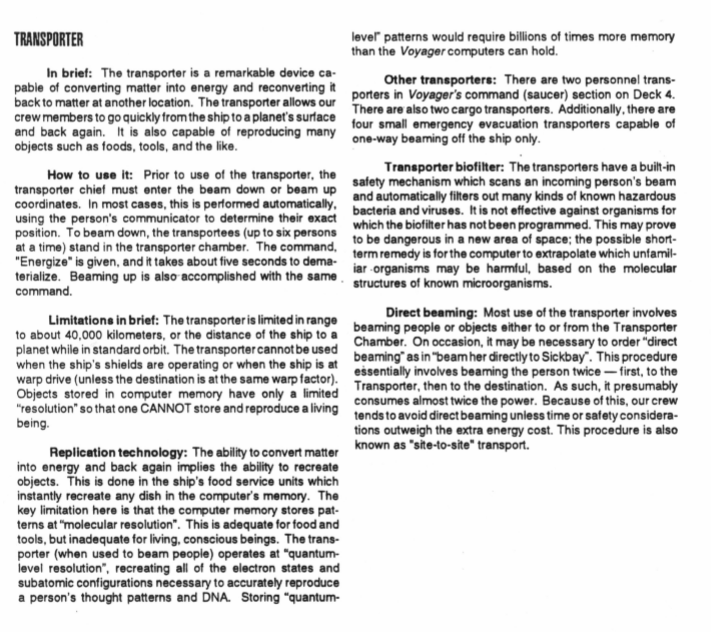 Not the answer you're looking for? Browse other questions tagged star-trek star-trek-transporter plot-device or ask your own question.

31
What happens to the air in the area, when things are transported or replicated?
13
Is Sisko referring to the events of First Contact here and if so how does it affect things?
15
At what point and why does it become (almost) impossible to transport through shields in the Star Trek Universe?
9
Why did R2-D2 only have part of the map?
6
In Star Trek IV: The Voyage Home, how did Kirk and Gillian successfully beam aboard the Klingon ship together?
4
Did Sybok have any means of preventing a ship from beaming out the hostages on Nimbus III?
12
How did the transporter malfunction in “Star Trek: The Motion Picture”?