Who's the child and her mother that can "talk to flowers" in Ruins?

In Ruins (1995), a Marvel Comics limited series, there is a child who says that she has a mother that "talks to flowers". Who's the child and who is her mother?

I was able to identify many of the characters referred to in Ruins but not this one. This part also wasn't mentioned in the Wikipedia plot summary for Ruins. I searched for Marvel comics characters that have a "talking to plants" ability but have only found Dryad and Klara Plast, and they both seem to have been introduced after Ruins was published.

The page where the character appears and mentions her mother is below:

Click on image below to view original, full-sized image. 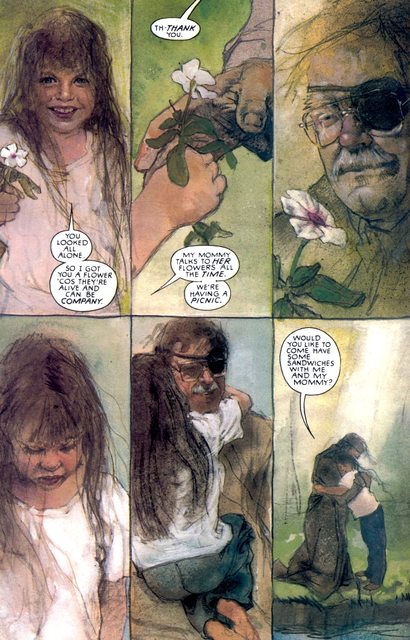 The girl was just a girl. According to my good friend, Ruins artist Terese Nielsen, she was inserted into the plot in order to demonstrate Phil Sheldon's frame of mind.

Q: In Ruins, who was the little girl?

TN: The model was our daughter, the character was a random little girl that could tell he needed a flower and a hug.

Not the answer you're looking for? Browse other questions tagged marvel comics character-identification ruins or ask your own question.

4
Can the Abomination change back and forth?
2
Can the Hulk talk?
5
Who are the two yellow mares in the season 5 poster?
6
Who's that big scary guy talking to Kylo Ren and Hux?
3
Can Someone Explain the Continuity and Death Infinity Stones Recently Introduced?
0
Can Someone Explain Briar Raleigh and Magneto's Interest in Her?
22
Why can Carol Danvers change her suit colours in the first place?
10
What is Valkyrie's real name?
4
Does Storm have any family, i.e. are Spyke and Mij'nari canon in the main Marvel universe?