Why did the Indigo Tribe kill a Green Lantern?

Blackest Night - Tales of the Corps #01 (2009) shows the Indigo Tribe stumbling upon (or maybe it was on purpose) a fight between a Green and a Yellow Lantern.

The Green Lantern is almost defeated and tells the Indigo Tribe to run before they get in the crossfire.

The Indigo Tribe then channel the Green Light and kill the Green Lantern and Yellow Lantern. 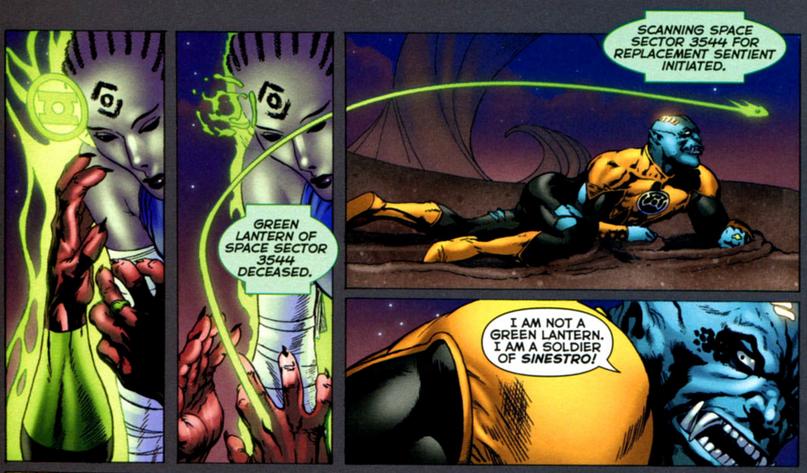 Why would the Indigo Tribe do this if they wanted

all possible Lanterns to help defeat Nekron with their light?

It seems like it would be counterproductive to slay any of the Lanterns.

As referenced from Wikipedia:

The Indigo Tribe is one of the nine Corps of the emotional spectrum within the DC Universe. Using indigo power rings and power staves, they are able to wield the indigo light of compassion. They've been depicted as being major participants within the Blackest Night crossover event; however, their reclusive nature makes them the most elusive group among their peers (comparatively limiting their depictions within DC titles).

The Indigo Tribe finds the Green Lantern of Sector 3544 grievously and perhaps mortally injured. It can be assumed that like any other color-wielder, the Indigo Triber should have been able to tell if the Green Lantern was mortally wounded. If he was already spitting up blood, had open head injuries and barely capable of speaking effectively, the Indigo Tribe agent may have decided the most compassionate thing to do for that Lantern was to end his suffering. Since neither Lantern appeared to be much of a threat to them, it was certainly not fear of the Lanterns that prompted her behavior.

I am certain that the slaying of the Green Lantern would not have been a good thing, especially in light of the circumstances, however, in their mind, ending the suffering was for the greater good, as they saw it.

Not the answer you're looking for? Browse other questions tagged dc green-lantern blackest-night or ask your own question.

7
Any signs of the other Lantern corps?
11
What does the Indigo Tribe oath mean?
11
Can anyone wield a Green Lantern ring?
6
Where does the new 52 start?
10
Symbology in the Lantern Corps emblems?
6
What happened to Bruce Wayne in Green Lantern Vol. 4?
10
Fear is the enemy of will, but what is the enemy of fear? (And the rest of the emotional spectrum)
3
Green Lantern comic with Hal or Guy offering another character a pack of alien beer
17
Green Lantern who can make constructs almost instantly