How did this ship jump to lightspeed within a gravity well?

Rogue One spoilers ahead. During the escape from Jedha

The main characters attempt to outrun the wave of destruction caused by the single reactor laser from the Death Star. They succeed by boarding their U-Wing and jumping to lightspeed from fairly close to the moon's surface. While technically a "moon", it's still fairly massive (listed as larger than Yavin IV, for example).

It's established canon that gravity wells of sufficient strength will prevent jumps to lightspeed (and pull ships out of hyperspace), and there are even ships designed to make use of this effect.

My question whether this an actual limitation of the technology, or if it's simply a safety feature (and if so, why can't those safeties be turned off for the aforementioned gravity well ships; what's the difference here)?

Note: There is a similar question, but it only addresses jumping into a gravity well (which based on canon simply pulls you out of hyperspace). This question is asking the opposite.

Note 2: The most similar canon example I can find was during the episode Jedi Crash (S1:E13) of The Clone Wars. Best I have found, they were in the upper atmosphere well above the planet's surface, and the issue wasn't mentioned. This means gravity was either low enough for it not to be physically impossible, or low enough that the safeties (assuming they exist) didn't care.

Entering hyperspace inside a gravity well is not impossible

According to Pablo Hidalgo, entering hyperspace while in atmosphere is risky, but not impossible. 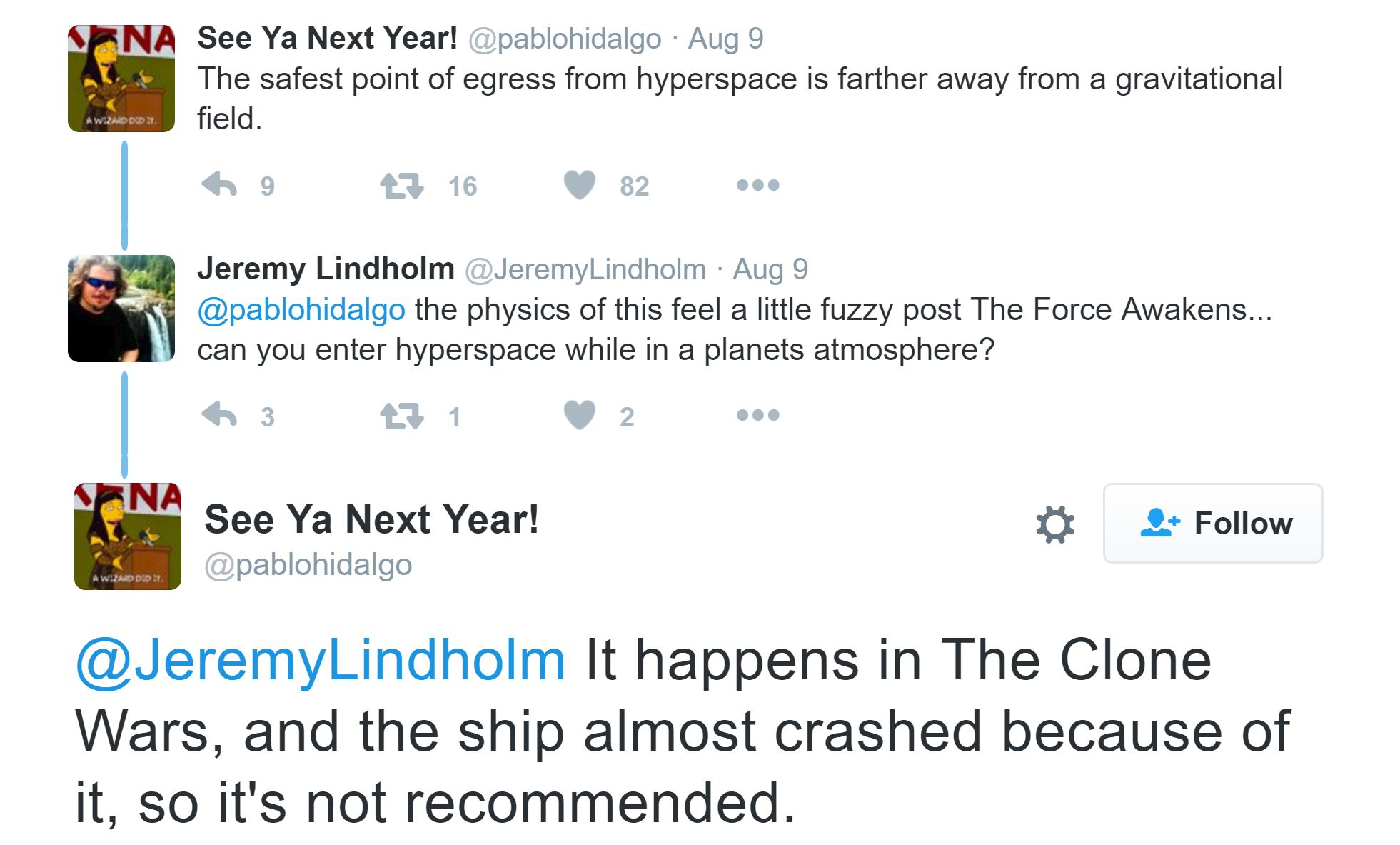 Here he’s referencing “Jedi Crash,” of course. Although entering hyperspace while near a planet is probably a very bad idea, the alternative is to get blown up by the Death Star. There’s really no other option, since the standard engines of the U-wing weren’t fast enough to escape the shock wave:

He felt the U-wing rise on a crest of the storm, shuddering all the way as it tried to match speed, and saw a shadow creep over the cockpit as a heavier, hotter cloud raced overhead and began to fall.

As for the gravity wells of Interdictors, which are said to prevent escape, one presumes that they are much stronger or more directed than those of a planet, thus harder to escape without serious damage. I don’t think this has been stated one way or another in canon, though.

Additionally to Adamant's answer, they were not all THAT deep in the gravity well - they were basically in space.

Cassian didn’t turn toward Bodhi. Maybe he hadn’t heard. But the rebel snarled “Come on!” as he diverted power again, urged the ship through that speck of light as oblivion raged around them. And the sky turned blue, then black, and the viewport filled with stars.
The U-wing leapt into hyperspace, and Bodhi laughed on the floor of the cockpit in giddy joy.
(Official Novelization by Alexander Freed, Chapter 8)

This was addressed in the junior novel Star Wars: Adventures in Wild Space: The Snare. In short, a ship attempting to jump to hyperspace within a gravity well isn't stopped by a natural force, it's blocked from doing so by the Drive Computer as a safety feature (e.g. to prevent you from blowing up or being ripped apart).

Lina thought quickly. ‘Not if we jump to hyperspace.’
‘When?’
‘Now!’
‘But we’re still in Thune’s atmosphere.’
‘Mistress Lina,’ CR-8R chipped in. ‘As well you know, the hyperdrive engines won’t fire within the gravitational pull of a planet. The safety protocols will activate.’
‘Not if we turn them off.’CR-8R’s head snapped around so fast, Milo thought it might explode. ‘You can’t do that!’
Lina nodded. ‘Actually, I can. When I got the main generator working. I had to by-pass the safety cut-outs. We could do the same for the jump to lightspeed, stop the computer switching the engines off. It’s simple.’
‘But highly dangerous!’ the droid added.
‘Only if we blow up.’
‘Is that possible?’ Milo asked.
‘Either that or the ship falls apart in hyperspace.’

As long as you're willing to accept this risk, and have sufficient control over your Drive Computer, you can jump to hyperspace (and presumably exit from hyperspace) as near to a planet as you like.

Not the answer you're looking for? Browse other questions tagged star-wars star-wars-rebels rogue-one or ask your own question.

24
Why were there no Interdictor-class Star Destroyers included in the taskforce hunting the rebels at the Battle of Hoth?
17
How well known were the events of the original “Star Wars” trilogy in the general galaxy? Or was it all about clandestine special operations missions?
9
What led Qui-Gon to conclude that Darth Maul was a Sith?
8
Where do X-Wing fighters—and similar small scale Rebel craft—dock to refuel and tune up when in space?
12
How did this character fly this ship?