Heraldry of the Twelve Houses of Gondolin

On Tolkien Gateway (supposedly considered a good source for canon) in the entry for the Twelve Houses of the Gondolindrim, the following image is shown to represent the coat of arms: 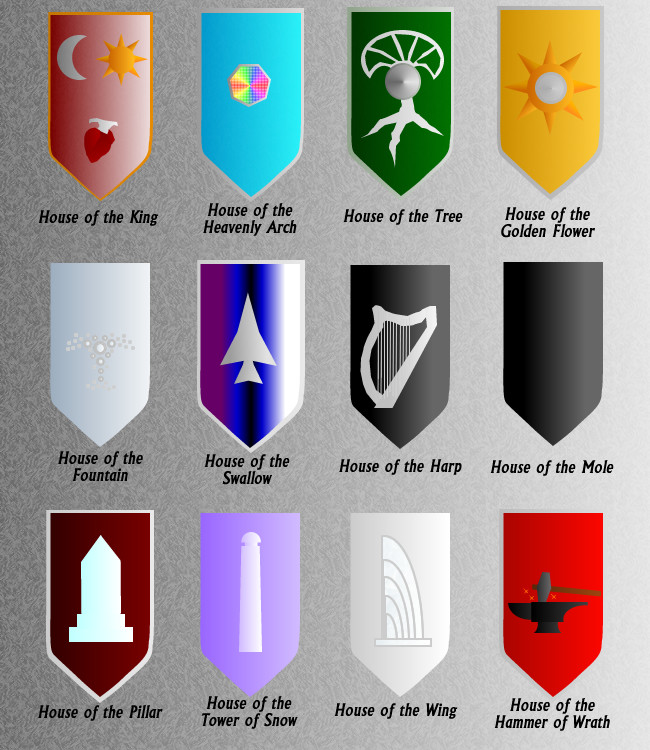 Granted that most of the coat of arms are described by the name of the house, but had Tolkien ever described the design of the different coat of arms or were they simply made up?

The heraldry Twelve Houses of the Gondolindrim was described in the Book of Lost Tales II: The Fall of Gondolin.

The first house to be accounted is that of the King:

“Mighty was the array of the House of the king and their colours were white and gold and red, and their emblems the moon and the sun and the scarlet heart”
The Book of Lost Tales Part 2: The Fall of Gondolin

This suggest an accurate depiction of the House of the King in the image.

“Lo! all these wore wings as it were of swans or gulls upon their helms, and the emblem of the White Wing was upon their shields. But the folk of Meglin were drawn up in the same place, and sable was their harness, and they bore no sign or emblem, but their round caps of steel were covered with moleskin”
The Book of Lost Tales Part 2: The Fall of Gondolin

The harnesses being "Sable" proves the depiction to be correct, as from Wikipedia:

In heraldry, sable (/ˈseɪbəl/) is the tincture black

“But the shield was of a shape strange to Tuor’s eyes, for it was long and tapering; and its field was blue, in the midst of which was wrought an emblem of a white swan’s wing.”
Unfinished Tales: The Coming of Tuor and the Fall of Gondolin

The House of the Swallow and of the Heavenly Arch were described as:

“Now the folk of the Swallow bore a fan of feathers on their helms, and they were arrayed in white and dark blue and in purple and black and showed an arrowhead on their shields.” [...]
“Every shield of that battalion was of the blue of the heavens and its boss a jewel built of seven gems, rubies and amethysts and sapphires, emeralds, chrysoprase, topaz, and amber.
The Book of Lost Tales Part 2: The Fall of Gondolin

There too were the folk of the Pillar and of the Tower of Snow, and both these kindreds were marshalled by Penlod, tallest of Gnomes. There were those of the Tree, and they were a great house, and their raiment was green. They fought with iron-studded clubs or with slings, and their lord Galdor was held the most valiant of all the Gondothlim save Turgon alone. There stood the house of the Golden Flower who bare a rayed sun upon their shield...
The Book of Lost Tales Part 2: The Fall of Gondolin

The house of the Golden Flower seems to be correct, however that of the Pillar, the Tower of Snow and the Tree all seemed to have been made up (Besides that the Tower of the Tree wore green).

“Then came there from the south of the city the people of the Fountain, and Ecthelion was their lord, and silver and diamonds were their delight; and swords very long and bright and pale did they wield, and they went into battle to the music of flutes. Behind them came the host of the Harp, [...] They were dight with tassels of silver and tassels of gold, and a harp of silver shone in their blazonry upon a field of black...”
The Book of Lost Tales Part 2: The Fall of Gondolin

And finally the people of the house of the Hammer of Wrath:

“Now the last of the battalions was furnished by the folk of the Hammer of Wrath [...] The sign of this people was the Stricken Anvil, and a hammer that smiteth sparks about it was set on their shields, and red gold and black iron was their delight.”
The Book of Lost Tales Part 2: The Fall of Gondolin

5
Why didn't Morgoth track the Eagles to find the location of Gondolin?
18
When Eru reshaped Arda, did he also change the cosmos?
22
How much did Tolkien write about the connection between WWI and his work?
4
Is Minas Tirith modelled on Gondolin?
4
Why didn't Turgon heed Ulmo's Warning about Evacuating Gondolin?
1
Dragons in the Fall of Gondolin and the War of Wrath
31
Why does Gandalf act in this way in the Houses of Healing?
25
Why was Ondolindë always referred to as Gondolin?